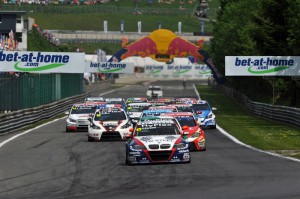 Salzburg hosted its first race in May.

Like the cars on the race course, Eurosport’s role as producer, host broadcaster, and marketing force behind the FIA World Touring Car Championship (WTCC) continues to gain momentum. The event has already overtaken the World Rally Championship and the move to a complete HD production this year gives viewers in 178 countries and 81 broadcast rights holds more reason to believe in the 24-race event and keep tuning in.

The current season has been highlighted by a brand new speedway, the Salzburgring in Austria (and located in Salzburg) that debuted in mid May. Belgian OB provider Alfacam, who possesses a lot of experience with HDTV, rolled out OB33 Alfacam for the event.

OB33’s kit includes a Grass Valley Kayak vision mixer, Grass Valley LDK8000 and Sony HDC1500 cameras, a Lawo audio board, EVS XT[2] replay servers, Riedel intercoms, and more. The team laid down 34 kilometers of cables, mostly fibre, as the course does not have an integrated cable infrastructure, according to Roland Huygaerts, production manager at Alfacam.

The race was shot with 14 HD cameras around the course as well as two wireless HD cameras and 24 new in-car cameras purchased this spring.

“We always choose eight cars and equip each of them with three onboard cameras,” says Huygaerts. The setting of the cameras depends on the editorial requirements but the common positions are one facing front, one facing the driver, and the rear shot.

“At the end of this season we even want to experiment with remote-controlled moving cameras in the cars, but we have to be careful not to disturb the driver,” says Huygaerts. Two relay antennas helped get wireless signals and on-board camera signals back to the OB van.

The team also used three Sony HDC-1500 HD cameras to get the most out of the fibre connections that spanned the large course, including a 26-metre high crane that oversaw the course.a 26 meter crane overlooked the whole course.

There are still some standard definition cameras in use, primarily mini cameras embedded into the track for low angle shots. Placing two of them in the straightaways, with one looking up the track and the other looking down the track, proved effective in giving viewers a sens of the speed and action.

The visual experience was complemented by a rich sound experience as all the camera positions had microphones. As always for a road race, the sound engineer had a huge challenge to balance the sound because the audio levels can vary greatly depending on where the microphone is relative to the cars on the course.