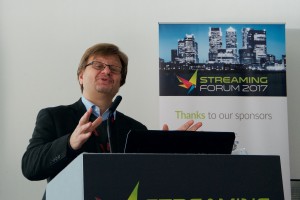 In 2013, BT launched the BT Sport App on iOS, Android and the web alongside its new sport channels. It has been developed further since and has proved popular. Now BT hopes to replicate BT Sport’s success in its wider TV OTT offering, building on it to align it even more closely with its set-top box.

As Mike Rizzo, head of IPTV solutions, BT TV and BT Sport, told last week’s Streaming Forum at BVE in London, the convergence of OTT and broadcast is now central to what BT Sport is doing.

While IPTV is very similar to broadcast, with programmes available online, OTT, as typified by Netflix, was “in the early days seen as a bit of a threat to telcos and established operators.” It had very low upfront costs, piggybacked on other people’s networks, “and play[ed] the net neutrality card to say: ‘Hey, we need equal access to the network’. And then, and this is the bit that really hurts, when there is a problem and the customer calls saying: ‘Oh, my video is breaking up,’ they just say: ‘Call your ISP, call your network operator’ – which is us.” However, this early tension has dissipated. Not only is BT now both a broadcaster and OTT service, but it also re-sells Netflix as part of its paid offering.

“Clearly customers like OTT. OTT means you don’t have to be at home. You can take your video with you wherever you are. You’ve got a lot more freedom in terms of devices,” he said.

For BT, OTT means: it works over multiple networks (although this doesn’t mean it is network agnostic as it can do things differently on those networks it has some control over); it can be delivered to a wide range of different devices (including smart TVs or gaming consoles); can be sold via various channels (and services may vary depending on subscription level or sales channel); and can be either a first or second screen application that may be used in conjunction with a set-top box, but doesn’t have to be – however, what is delivered has to be essentially the same, whichever device is used.

“Those two worlds [broadcast and OTT] are very much coming together now and it doesn’t make sense to see them as separate things,” said Rizzo.

The BT Sport App wasn’t just about video, but had stats, post-game analysis, highlights, and news. “This really exceeded our expectations in terms of take-up. In the early days we struggled with the load. In the run-up to a game we would suddenly see this massive spike of people logging in. One of the things we learned from this is that cloud really works, because the back-end of this solution, most of it is in the cloud, and the little bit that isn’t is the bit that caused us grief – that was the bottleneck.” Because of security concerns, it hasn’t yet moved its user authentication into the cloud.

When it won the rights to the UEFA Champions League and Europa League, it “was a game changer for us, because for the first time we now had loads of different events happening concurrently.” It delivers 350 matches per season, with up to 12 matches at any one time. On the STB this meant adding more channels, including some that lasted only for the duration of a match. For its interactive services it initially wanted to make a great experience for its App and web, “but we quickly realised that we didn’t want to limit ourselves to the OTT offering,” and wanted to offer that same interactivity on the STB as well.

With 12 games at once, it couldn’t fit them all on to traditional IPTV multicast on the STB, so it used the OTT player to cover the extra games.

BT worked with Deltatre, which has a lot of experience working on concurrent games, to create a timeline, showing all the key events in a game, live text commentary, windows showing line-ups and tactics (for any of the games), and buttons offering instant switching to other matches, with the ability to replay events you might have missed, along with a multicam camera map to offer different angles. “This is really taking full advantage of the direct connectivity that you have, that one-to-one relationship you have with the customer in a pure OTT environment.”

It has found that many sports viewers want to watch a couple of games at once, both on TV and a tablet, so it wanted to replicate the App on the STB by creating a connected red button experience. Like the App, it is built in HTML5, running in a browser, overlaid on the broadcast video. It is simple to use, with goal alerts and easy switching between matches. “You are navigating from one game to another without having to know what channel the game is on.”

Besides gaining excellent customer satisfaction in surveys, the system has also helped increase revenue. There had been very little time to launch it, but the use of the cloud, and the agile collaborative development system (constantly working with trial customers), made it much easier. Taking a “holistic view of the customer proposition,” considering both OTT and broadcast together, really worked, not only for users but also in terms of sharing technology, such as using the same source of data for populating the timeline and generating stats. “It really helps not to pigeonhole technology. The idea that things like HTML5 are seen as an OTT technology, that’s no longer the case.”

On the day of the talk BT TV started rolling out its next generation customer experience (based on the Sport App) to its YouView STB, and will extend it to its TV App by July. It is a complete redesign focused on personalisation, redolent of the Netflix interface, but with the ability to rent or buy content. “We are pulling together the worlds of linear TV and on-demand TV into one place, and those carousels can contain references to programmes that are on live TV as well as on demand,” said Rizzo.

“We are trying to create a seamless experience on all devices. It doesn’t matter whether you are on the set-top box or a device – it’s exactly the same.”

So that it can react to customer feedback, it is able to tailor the navigation very quickly. “We have a common tool that feeds that navigation structure to all devices simultaneously.”

As they learned from the Sport App, it is very important to have one common back-end for all devices, including the STB. It is all API-driven, to deliver a consistent approach, to lower costs and allow them to introduce new devices more quickly.

However, the old broadcast monolithic architecture approach doesn’t work well for this, as it makes it difficult to quickly add new services, adapt or test, which is why it started moving to a micro-services approach. “Over time we hope to completely replace our legacy monolith.” However, “you don’t just switch to a micro-service architecture overnight,” but by building micro services around its existing legacy systems it will eventually replace them.

Embracing the cloud has not only helped it scale quickly, but has proved ideal for testing. “In the past we had a physically limited number of test environments, which sometimes weren’t being used for several weeks, and when we were using them we found we needed more. With the cloud you can just spin up test environments when you need them, and turn them down when you don’t. It works out cheaper, and you always have as many test environments as you need.”

It now has one common headend, which encodes and packages for all devices, including the STB. It is starting to look at multicast with conversion to unicast at the edge. It uses multicast on its own network and with some partner networks for IPTV to deliver linear channels, but at the moment it is pure adaptive bitrate (ABR) unicast for OTT, although for networks it controls it could benefit from the efficiency of multicast delivery.

It is also working towards a common content protection format for all devices, and already has a common VoD workflow for all applications. It doesn’t have multicam on the STB now, but there is no reason it couldn’t add that, with one picture coming via traditional broadcast and the other via ABR over the internet.

Other benefits from convergence will be: the ability to add restart TV services; a network PVR; delivering companion clips or multi-camera angles alongside broadcast (although this poses sync problems); and social TV (similar to the way Orange TV in France allows viewers to take a clip of live TV and share that with friends on social networks).

BT TV is involved in the EU 2-Immerse project looking at object-based broadcasting (within which it is developing synchronised multi-screen/multi-window applications). This will be ideal for sports, where there is typically a lot of graphics embedded in the video. However, by treating each graphic as an object, transmitted separately outside of the video, they can be manipulated individually. “Then you can get a lot more flexibility in how you present things to the user, and give the user more control.” For example, one viewer watching MotoGP on a 32-inch HD screen may see a leader board taking up the full height of one side of the screen, with timing information alongside it in the lower third, while someone watching a 65-inch UHD screen could have the leader board the exact same size (but now taking up a lot less space), the timing information moved in underneath it, and a picture-in-picture view underneath that, leaving a lot more room for the race video.

If you add a tablet, then it can be showing multi-camera video synchronised to the TV, in a personalised layout, with control over the timeline, and objects can be moved (thrown) between the displays. A further app for social media, including third-party apps, also synched to the TV, could be on a phone, so that viewers can discuss and share the race with friends. “This is something we are building in a proof of concept. A key challenge with this is it is not just about the objects – you need some metadata to capture the way you represent these objects and enable them to be moved around, transferred and manipulated,” he explained.

“Also, synchronisation is difficult when you have a variety of different latencies in different technologies.” Broadcast tends to have a lot lower latency than OTT using ABR. You could delay the broadcast, “but there is also a lot of work going on in improving the latency for ABR. Certainly where video is being delivered in our own network, in a situation like this where you are trying to synch with the main screen, then there are things we can do within the CDN [content delivery network] and assumptions we can make with buffering, for example, which means we can improve that ABR latency and enable synchronisation without adding too much latency end to end.”

In response from an audience question about the looming EU directive that will mean that any of its subscribers should be able to access its services wherever they might travel in the EU, Rizzo replied that it is ready technically for this. It uses Akamai and Limelight CDNs which can deliver anywhere in the world, “but because of rights issues we have to geo-restrict to the UK at the moment, but we could very easily open up that to the whole of Europe.” As far as he knows, BT will only be obliged to offer streaming services across the EU to customers who are resident in the UK. That could, of course, change to allow it offer services to subscribers outside the UK, but that is a problem that the rights holders would have to address.