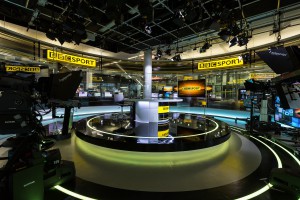 Inside the BBC Sport studio at MediaCity UK, Manchester

SVG Europe is delighted to announce that delegates attending its SportTech Europe event in Manchester, UK, next month will be able to benefit from comprehensive technical tours of BBC Sport and studio complex dock10 on the afternoon before the summit itself.

Commencing at 4pm on 6 May, the 45-50 minute tours of both sites will take visitors behind the scenes of two leading MediaCity UK facilities. Control rooms, post-production areas and more will all feature on the specially-devised routes.

Meanwhile, a dock10 representative confirms that visitors “will benefit from access to dock10’s high tech studios where filming of shows such as The Voice, Blue Peter and Jeremy Kyle take place. Delegates will then be taken through to the Post Production Suites and their MCR/CTA.