As eSports rises in prominence as a live-sports property, the most common question from broadcasters — especially those accustomed to a traditional sports environment — is what are the differences between broadcasting a virtual sports event and a physical one?

Sure, an eSports event feels more like a rock concert than, say, a baseball game, but the differences actually aren’t all that many. As was evident at SVG’s recent eSports Production Summit in Los Angeles, it all comes down to a common foundation that any broadcaster or content creator can agree on: storytelling. 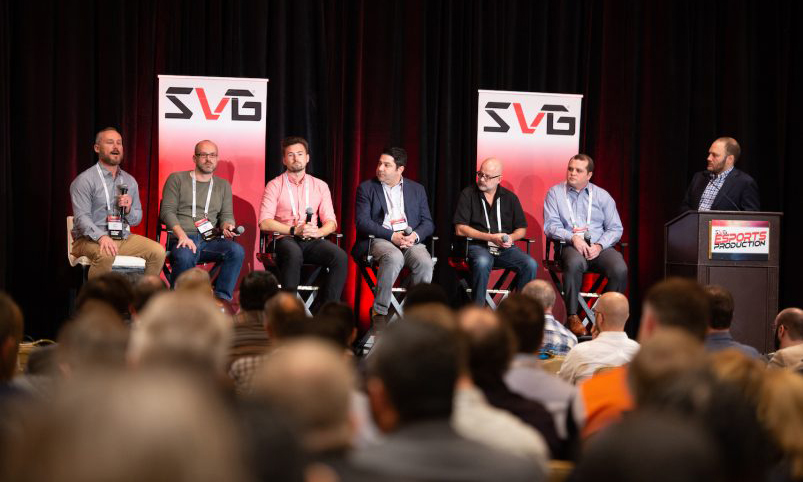 “We don’t have just a hardcore audience anymore,” noted Simon Eicher, executive producer/director of broadcast, eSports services, ESL Gaming, which produces major global eSports competitions like the ESL One series, which spotlights games like Dota 2 and Counter-Strike: Global Offensive. “[eSports is] becoming more and more casual entertainment, so replay features and different angles help break up the game and [make it] more explanatory and educational. [That] becomes more and more important.”

Besides some core technological tenants of broadcast —camera angles, replay, graphics — a high-end eSports show features a significant position known as observer. The role of the observer is basically to drive the views of the action from inside the game itself, choosing the shots that will ultimately tell the story of the action within the game, a camera operator inside the videogame. In the early days of eSports, it was a task reserved for the on-air talent on a show, but, as productions grew larger and more complex, the role carved out its own valued place in the crew list.

Determining the number of observers on a production and what their assignments are is an ever-moving target. Like the number of camera operators on a traditional show, it largely depends on the game itself.

“We almost always approach it from the ground up,” said Andrew Lane, director, broadcast, FACEIT, an eSports production house whose biggest projects include this year’s PUBG Global Summit in April. “We take the game and, looking at what are the core philosophies of the game, work it backwards.

“We need to know what we want to show and what our core aims are to build storylines throughout the game. Then we’ll work that back to work out a process that will work, which isn’t always having a lot of people but sometimes is.

The role of the observer has further evolved as a newer genre of eSports has gained favour with both players and viewers: the battle royale game. Games like the super-popular Fortnite fall into this category, and what makes them challenging to broadcast is that many solo characters are competing across a vast map: ultimately, countless scrums occur in different places simultaneously.

“From a storytelling perspective,” he continued, “the big hurdle right now is educating people who are watching this story. How can we simplify some of the information that’s being passed?”

In addition, the battle royale format and its scoring also offer difficult wrinkles to the storytelling process.

“There’s, oftentimes, no perfect winning moment,” said eSports-business veteran Scott Smith, co-founder/managing director, Do Not Peek Entertainment, a new eSports-focused production company located within the Scottsdale, AZ facilities of video-production service Sneaky Big Studios. “They have to go back and add up scores because they played for eight or nine rounds. So part of the challenge in that genre is how you tell an exciting story of the winner.

“We’ve had some big battle royale events where the desk has had to say, ‘We’ll be right back. We have to go tabulate the scores to tell you who won.’ You lose that trophy moment. They’re getting better at it. It’s such a new genre.”

Storytelling in eSports has been evolving into new stratospheres, thanks to the growing relationship between game publishers and eSports broadcasters.

“A game like Counter-Strike actually has really good spectator tools built into it,” said Lane. “It has fantastic camera planning. You can map a jib movement and bind that to one of the keys on the keyboard. But that’s something that has just been released. The developers often don’t think about these things until a few years afterwards when they realize [their game is] actually going to be an eSport. So we have to adapt and sometimes build a custom solution from scratch.”

Added Wagnitz, “What we pride ourselves in is partnering with the publishers and asking them for specific tools or adjustments in the UI. That’s where a lot of the success is. As the broadcast experts, we can share with them what will make a better story.”

From an operational standpoint, another huge driver of eSports growth as a live-video product has been aggressive commitment to the use of REMI, or at-home, production models. Many eSports broadcasters have a large control room and broadcast facilities in a home facility and produce a show that might be happening on the other side of the planet, with much of the crew never having to step foot into a venue or a hotel. REMI production is rampant in eSports: many of even the largest competitions are produced from studios and facilities thousands of miles away.

“Because eSports operates so globally, it’s important to be able to interconnect and give all of the freedoms that a producer would have if they were onsite,” said Matt Donovan, broadcast and technology manager, Riot Games, a publisher that has been using REMI production on its competitions since 2012. Just last month, the company hosted its League of Legends World Championships, a five-week world tournament featuring 20 broadcast days and four locations in three cities in Europe. The entire production was handled from Riot’s facilities in Los Angeles.

Which tasks remain at home and which are hired onsite, much as in traditional sports, is decided on a case-by-case basis. Largely, though, control-room positions remain at home, and camera operators and other critical onsite technicians are hired from local freelance pools in the city where the event takes place.

One of the more hotly-debated topics of REMI-based shows is what to do with the talent. For many, even in eSports, there’s incalculable value in having on-air talent at the event to provide access and sense of place to the story.

“You do get some pushback from your talent [on REMI shows],” said Smith. “They like to be in the building and feel that experience. It probably makes sense to have a ‘sideline’ reporter and your main casters in the building, but maybe your analyst desk is at home.

“Sure, there’s a cost to getting that transmission back and forth, but, [with] 60-80 people that have to work that production, if more than half of them live in that city, there goes your hotel and flight costs. All those things go away and that camera operator or [assistant director] can sleep at home. That makes them a happier staff member.”

Gaming’s most powerful distribution platform, Twitch, is being more aggressive in producing original content. The platform’s biggest stars or influencers are those that handle all of their own streaming from home. So the company has created a program series called Twitch Rivals: the platform can host elite-level competitions entirely in a virtual environment, injecting more-frequent original and sanctioned content than ever before.,

“There are so many individual production pieces that you need to unify it into one production workflow. We’ll see how that turns out in the future” – Simon Eicher, ESL

“It’s so valuable for the streamers to be able to have the ability to stay at home,” said Twitch director, eSports production operations, Mitch Rosenthal, who recently moved to the company following a successful run overseeing production operations for Riot Games. “Their primary way of making money is streaming. The prize money is a nice delighter, but for them to be home and able to continue to stream on a low-cost basis and carve three or four days out to compete and build their brand further is key.

“Hopefully, [Twitch] Rivals will not only elevate the existing streamers but start becoming a mechanism for up-and-coming streamers to be able to get on the platform and start building up new promos in the space.”

REMI, even in eSports, remains an industry-wide work in progress, but, as traditional sports slowly copes with it as a reality of the live–sports-television future, eSports platforms are likely to go deeper and deeper into this model of production.

“There’s still a lot of stuff to figure out,” said Eicher. “For ESL, our biggest question mark is having talent all across the globe. It will likely turn into some kind of distributed production in that sense. There are so many individual production pieces that you need to unify it into one production workflow. We’ll see how that turns out in the future.”