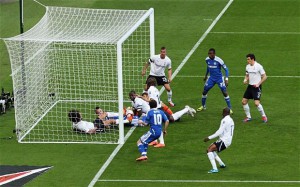 The long-running saga over whether goal-line technology (GLT) will finally be used officially in football matches could be resolved by July, following the second phase of testing for proposed technologies approved by the International Football Association Board (IFAB).

The friendly game between England and Belgium at Wembley Stadium on 2 June will be a test bed for the Hawk-Eye video-based ball-tracking system, while the Denmark versus Australia match in Copenhagen could feature GoalRef microchip technology.

The IFAB draws up laws for football internationally and in March this year selected Hawk-Eye and GoalRef as the two systems to be assessed before a final decision is made. Calls for GLT of whatever kind to be introduced have increased in recent years after broadcast TV replays have shown some decisions by referees and assistant referees have been incorrect.

The Hawk-Eye trial during the England-Belgium match, the home team’s last outing before the start of Euro 2112, will be supervised by technicians from Swiss test house EMPA (Federal Laboratories for Materials Science and Technology). Six cameras will be set up around each goal at Wembley in the run-up to the game. The technology was previously tested this year on 16 May during the Hampshire FA Senior Cup Final at St Mary’s Stadium in Southampton.

GoalRef operates by a microchip in the ball reacting with low magnetic waves generated around the goal. If the ball crosses the goal line, this registers as changes in the magnetic field.

During the England-Belgium game, data from Hawk-Eye will be available only to EMPA staff and representatives from IFAB and international football governing body FIFA and so will not influence any decisions by the match officials. Sony, which bought Hawk-Eye in March 2011, said it is not in a position to comment on the tests at this time.

The president of FIFA, Sepp Blatter, has long opposed GLT but in recent years seems to have finally acknowledged that referees do need some technological assistance. A FIFA spokesman commented, “We would like to place on record our sincere thanks to The Football Association for their willingness to support the live match tests, a critical part of Test Phase 2 for goal-line technology.”