In venues ranging from massive pro-sports stadiums to mid-level college campuses, the role of the control room has expanded well beyond serving a single videoboard. In many cases, these control rooms have become broadcast centers, serving not only the videoboards on game day but also the needs of digital- and social-content creation, linear conference networks, studio programming, other on-campus venues and facilities, and much more.

At SVG USA’s Sports Venue Production Summit last week at Mercedes-Benz Stadium in Atlanta, a panel featuring representatives of the University of Georgia, systems integrators Alpha Video and Diversified, and consultant WJHW took the stage to address the evolving role of the control room.

Think big: Build your core infrastructure with the future in mind

Although it’s impossible to see into the future and determine the exact infrastructure and workflow needed when building a control room, all four panelists agreed on the key to success: overbuild now so you can expand in the future.

“Core infrastructure allows you the opportunity to do a lot of things,” said Jeff Volk, VP, Alpha Video. “If you design things from the inside out, that allows you a lot of room for future expansion. That core and the connectivity out to your venues is the real key initial building block to allow you to meet your needs today and then expand in the future.” 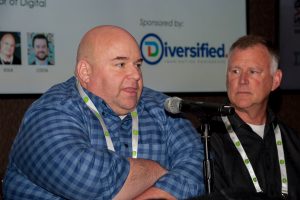 In the case of the University of Georgia, for example, the Bulldogs’ video team opted to install a router with a much larger I/O panel than was necessary at the time of installation. Initially, the router served only a single control room, but, when the SEC Network launched in 2014, Georgia was forced to expand by transforming its audio room into a second dedicated control room. Then, with further linear- and digital-distribution opportunities becoming available, the university recently built a third control room from the ground up. Having installed a large router originally, Georgia has not had to expand its routing infrastructure despite tripling its control-room count.

“Nine years ago, when I interviewed at Georgia and I asked about their control room, they told me that they didn’t have one, nor would they ever have one,” said Mike Bilbow, assistant athletic director, digital and production, University of Georgia. “Now we have three. So that tells you a bit about how the world has changed in nine years.”

Serving multiple masters Is not always a plug-and-play scenario

Although the practice of building a single control room to serve multiple venues and needs has become popular at college campuses across the country, the growing number of non-traditional video displays can make this strategy more difficult. Screens with a 16:9 aspect ratio are becoming increasingly scarce as venues look to spread LED across the largest possible footprint at their respective venues, complicating matters for a control room that is also being asked to produce 16:9 HD content for other linear and streaming distribution outlets.

“it is very difficult to serve two or more masters at a single venue,” said Stuart Reynolds, director, sports and live events, Diversified. “Unfortunately, there is both a convergence in technology and divergence in what we’re trying to do in order to meet [the needs] of a board [like the 360-degree halo board at Mercedes-Benz Stadium] while also trying to meet typical broadcaster needs. It’s simply two different shows.

“If you’re trying to format [content] for displays of this size that are not 16:9,” he continued, “where you are potentially losing the top and bottom of camera shots, — how are you going to make that same shot fit the 16:9 that is going elsewhere?” He added that a non-traditional–size videoboard makes it difficult to accommodate that in building a single control room.

Illustrating an ROI: Money and space are always in short supply
The first question that any director of a video operation must address in building a new control room is where the funds are going to come from. Although state-of-the-art control rooms have become the norm for almost any organisation building a new or renovating an existing venue, securing the necessary funds and space for the project remains a challenge, especially for college programs on a budget.

“Get in early and get as much space as you can. Space is one thing that does not increase at any point once a stadium’s built. You got what you got,” said Daniel Riess, consultant. “The other part, especially for colleges, is that this is an arms race. In terms of recruiting, you don’t want to be the school that can’t show your team on the internet or on a conference network. That becomes an arms race, and you can use that as a tool, too.

Volk seconded that sentiment: “A lot of ADs might look at ROI as what you get paid per event, but … you have to have a senior administrator who also understands the ROI of brand identity, the impact that getting your teams promoted has on recruiting, and how that can then impact ticket sales. There is a very large, intangible ROI, and you have to paint that picture for people to get the [necessary] dollars appropriated. Otherwise, it can be a struggle.”

Bilbow added that managing expectations when discussing the project with the powers that be is key.

“You’ve got to be honest with [your superiors]. This is not a cheap business to get into,” he pointed out. “If you’re going to try to create content, own your content, and put it on as many platforms as possible, you need to be prepared to spend money and spend money wisely. Surround yourselves with good partners — integrators, consultants, and equipment managers — and future-proof yourself as best you can.”