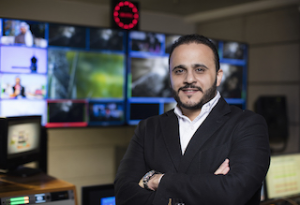 Imagine Communications has implemented a new playout system at premium family entertainment satellite service Alrai TV, which is based in Kuwait. The system is tightly integrated with existing islands of operations, provided by Imagine Communications in the past, covering production, news and playout.

Imagine Communications has worked closely with Alrai since 2004. In the past 18 months, the two companies have been focused on upgrading the existing systems to the latest next-gen technology. The final stage of the project added a comprehensive broadcast playout and news production automation network based on Imagine’s market-proven ADC automation platform.

Content for both the newsroom and for channel playout is stored on a network of Nexio® servers. Management of that content, including ingest, quality control and transcoding, as well as redundancy and archiving, is handled by Nexio Motion™ asset management software. This transparent utility layer links directly to both the ADC automation for channel playout and the Nexio integrated news production playout applications. The deployment also includes multiple Selenio™ 6800+ processing systems and Imagine Storage.

“We recognised that technology is moving on, and we wanted a fully integrated architecture that supported all of our workflows,” said Tarek Majdalani, director of engineering and operations at Alrai TV, who noted that the Kuwait-based broadcaster is upgrading its broadcast infrastructure with the objective of achieving a full HD transmission. “Although we have worked closely with Imagine Communications for over a decade, we carefully evaluated every vendor in the marketplace to ensure that we got the best possible solution. That solution came from Imagine.”

The new system was designed and implemented internally by Alrai’s engineering team and supported by Imagine Communications’ professional services team.

Anas Hantash, director of sales for the MENA region at Imagine Communications, added: “Alrai has exacting demands and technical standards, and we have had to prove our solutions against the rest of the market. Ultimately, we offered the best combination of functionality, reliability and local support through our Dubai centre of excellence. We also offered a natural evolution path towards the IP transition. We are delighted to be working again with Alrai TV.”

The new production and channel playout automation systems are now installed in the Kuwait headquarters of Alrai TV. Imagine Communications is continuing to work with the broadcaster on further enhancements.