League kick-offs: How Serie A is being covered for the 2018-19 season

Italy’s Serie A is known as one of the best football leagues in the world. It is not surprising, therefore, that TV coverage rights are much coveted.

It is reported that Sky Sports Italia now has an annual bill of €780 million to screen 266 matches, while Perform for DAZN is paying at least €193.3 million to stream 114 games each season.

Sky Italia broadcasts seven out of 10 games each match day, with Serie A available across different Sky platforms – satellite, DTT and over fibre. In addition, matches are available in UHD on Sky Q.

Each week, Sky viewers have access to two early kick-off matches on Saturdays and Sundays, plus the evening kick-offs on Sunday and Monday. 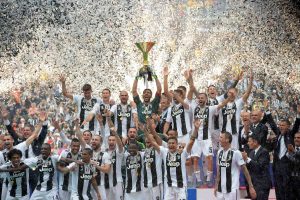 TURIN, ITALY – MAY 19: Juventus players holding the trophy after winning their seventh league titles in a row at the end of the serie A match between Juventus and Hellas Verona FC at Allianz Stadium on May 19, 2018 in Turin, Italy. (Photo by Juventus FC/Juventus FC via Getty Images)

“The contract is for three seasons, 2018/19, 2019/20 and 2020/21,” explains Manuela Baraschi, Head of Sport Production and Operations at Sky Italia. “We have the rights only for Italy, Vaticano and San Marino, but we produce the world feed for the in-house matches of Juventus, Torino, Fiorentina, Sassuolo, Spal, and Parma on behalf of Italian Football League.”

Baraschi says the biggest innovation for this current season is the introduction of 4K for all the matches. “Furthermore, we have a new Football Studio in our Sky HQ in Milan. We have installed Mo-Sys Augmented Reality, Robycam, and an LED wall.”

That studio is used for really important games, while Sky has unilateral facilities at each match with production handled at the venue. There are no plans at the moment for remote production.

Last month saw DAZN, the first global pure sport live and on demand streaming service, secure multi-platform broadcast rights for Serie A. The three-year deal will mean that DAZN will screen up to 380 Serie A matches exclusively in Germany and Austria, and digitally exclusive in Canada.

The rights package includes the Saturday night match at 8.30pm, and matches on Sunday at 12.30pm and 3:00pm, plus three exclusive games for every midweek round of fixtures. Alongside that live coverage, DAZN shows highlights of all games.

According to James Rushton, CEO at DAZN, the company’s entry into the Italian market will be a 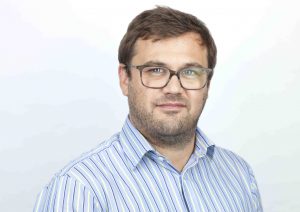 game-changer for Italian sports fans, giving them a smarter, more accessible and affordable way to watch sport, how and when they want.

“Using cutting-edge technology from the Perform Group, DAZN is available on 95 per cent of connected devices, including Samsung Tizen, LG WebOS and Android Smart TVs, on streaming devices such as Amazon Fire Stick, Apple TV and Chromecast, and Android and iOS Smartphones and tablets. It can also be viewed on Playstation 4 and Xbox One, and online via Safari, Chrome, Firefox, Edge or Internet Explorer.”

Rushton goes on to say that the new agreement reinforces DAZN’s premium and extensive multi-sport offering which gives fans the power to choose between simultaneous live matches and select the teams and players they want to watch. “The deal extends DAZN’s coverage of Serie A in Germany, Austria and Japan and adds it in Canada where is was previously offered by DAZN as part of a carriage agreement with beIN Sports.”

He goes on, “The sport industry is ripe for disruption. Consumer behaviour has been transformed by technology, with streaming becoming the new norm for viewing content. DAZN suits the changing needs of today’s sports fans. Since launching almost two years ago, we have disrupted the industry in multiple markets as we change the way the world sees sport.”

One of the headline grabbing announcements from DAZN in August was the fact that Cristiano Ronaldo had joined the company as a global ambassador. His task will include promoting DAZN across current live markets, plus future territories.

“Cristiano is undoubtedly a legend, fans love him and that’s why we wanted to work with him. He’s a big sports fan himself, so having him advocating the work we’re doing is perfect,” states Rushton.

Beyond the Italian borders

Like so many leading Europe football leagues, Serie A has a considerable following away outside of its home country. London based IMG has the global media rights outside of Italy and, as a consequence, has to deliver 380 matches a season plus support programming.

These matches have to be produced as a world feed so broadcasters can start and finish without any in-vision presentation, any domestic specific commentary, uniform graphics across every match. In short, that feed has to be such that any broadcaster can take it in full confidence they can stay with it for the full broadcast of two hours plus. 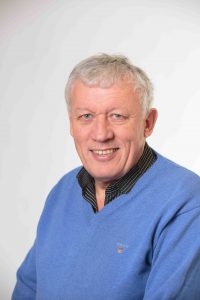 “Historically, Infront Italy has been the producer of all content for international distribution, but together with IMG, it was agreed that we should try to elevate the quality of production offered to global licensees where we could, subject to Serie A approval,” explains Graham Fry, global managing director, IMG Productions.

For some time, Infront has produced two weekly half hour shows – a preview/review magazine show called ‘Inside Serie A’ and a high-octane review of weekend matches through the various TV angles offered by host broadcasters, titled ‘Serie A Full Impact.’ These will continue to be produced in Italy by Infront. The former requires the filming of original content and that is easier to do from Milan than London.

Fry continues, “Infront and IMG agreed that to improve the level of content another one-hour show should be introduced – the more traditional highlights wrap-around show. Called ‘The Serie A Highlights Show’, IMG is producing this new programme from this season. Further to this, Serie A asked IMG to produce a 30-second match promo for every game — 380 in all.”

Fry reports that there is a good flow of co-operation, information, footage and editorial thought being shared between the two companies. “It’s a good working relationship which is bedding in well and we believe has improved the overall content offering for Serie A licensees.”

One of the biggest challenges has been how to improve the quality of the commentary. Historically English-language commentators based in Italy have been used, but the presentations have not included the use of football analysts in the traditional way expected of broadcasters in many parts of Europe.

IMG agreed that for the three games that it produces each weekend (Infront produces the other seven matches), it would use dual commentary – a commentator and an analyst – sourced from the UK and based out at IMG Studios HQ at Stockley Park, near Heathrow Airport. Commentary is all in English, but selected broadcasters have asked for Italian commentary, so this is something that IMG is looking into.

In addition, IMG, through design company Media219 and award-winning sports film director Daryl Goodrich, has created a uniformed graphic look and feel and animated title sequences across all 380 matches.

“The production is essentially a programme made to air so no in-vision presentation is required, although licenses may inject their own if they wish,” states Fry.

He adds, “The unexpected arrival of Ronaldo to Juventus has added an extra dimension to the coverage and to Italian football, which is already one of the top club leagues in the world and has seen a huge amount of investment from the clubs in recent months.”

Licensees are currently offered digital clips of 2, 4 and 15-minute highlights edits for each match — all of which are produced by Infront. Broadcasters are free to use these on their websites/social platforms one-hour post-Full Time while the 4-minute

When IMG won the rights, it announced its intention to offer an OTT service. Serie A Pass was launched for the start of the season, a move, which ensures as wide an audience as possible can see live action, is currently available in a number of territories including Brazil and Latin America, The Netherlands, Singapore and the Indian sub-continent.

In addition, IMG has launched a further OTT offering – Strive — in Scandinavia to show Serie A, alongside LaLiga. Strive is available in Sweden, Norway and Denmark.