Live from Monza: in the Paddock and Pit Lane with Riedel 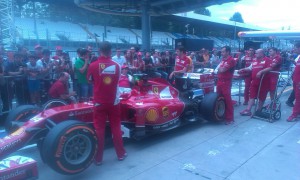 Ready for action: the Italian Grand Prix at the Autodromo Nazionale

Of the 19 circuits on the F1 calendar, the Italian Grand Prix at Autodromo Nazionale is not only one of the original (built specifically for Grand Prix in the 1950s) but it remains one of the fastest. Not for nothing is La Pista Magica haunted by fans, mostly Ferrari, in awe of drivers piloting a course which despite the introduction of chicanes in recent years has done little to curb the enthusiasm for speed.

The track has seen its fair share of accidents over the years but new technology can enable a rapid response to policing the race and for health and safety. The backbone of this infrastructure is engineered, supplied and maintained by Germany’s Riedel.

Its infrastructure starts with fibre. Riedel maintains 8-12km of its own fibre which it installs and deinstalls for each Grand Prix. Each circuit has a permanent fibre network but Riedel deploys its own… “so they know who to blame should anything go wrong,” says company operations manager Richard Serschen, who travels with the F1 circus along with up to 20 other Riedel engineers.

That fibre is then split into specific channels for each of the 11 race teams. Riedel equips teams with Artist intercom systems and Motorola TETRA radio intercom units (some 1500 are used during every race, given a bespoke application layer by Riedel).

The company’s Artist Intercom matrix has been adopted by the sport’s governing body FIA, which has just committed to another five-year contract with Riedel. In addition, the Formula One Management (FOM) – which produces the world broadcast feed – and the F1 teams use Artist as the standard communication platform. It is deployed to connect the FIA stewards, the pit crews and the drivers.

Signals are routed to a radio base station with three antennas (two receivers, one transmitter). Usually this is placed on the highest part of the circuit, which is the race control tower, but Monza’s race control is uniquely the same height as the surrounding paddock and grandstand buildings so Riedel places the antenna on a cherry picker.

The signals are then routed over Riedel’s RiLink global fibre service to its own data centre in Frankfurt (which serves as the hub for its worldwide operations) supported by a NOC, also in Frankfurt, and maintained 24/7 all year round and then on to teams and broadcasters.

Monza presents a unique problem in another aspect. It is a flat course built in deep woodland making line of sight for the RF links tricky although years of experience and experiment have smoothed the interference out.

The teams use different configurations of intercom equipment including 32, 64 and 128 port Artist mainframes with 40-50 control panels per team. That’s around 500 panels to take care of alone, and although there is a lot of inbuilt consistency from circuit to circuit it still needs to be unpacked and rebuilt between races, often to a very tight schedule.

Remarkably, SVG Europe is told that the drivers talk for 80% of the time around each lap. That’s while pushing the pedal to the metal (or finger to the button) and reaching speeds of 370kph at Monza. Much of this chat is apparently swearing but there is also a lot of sensitive driver-team feedback and telemetry for the ears and eyes of the race team, routed back not only to the pit lane but to team headquarters based in the UK and Italy (Ferrari) in order to make decisions in real-time to try and affect the race.

FIA team rules this year permit only 60 crew on-site but up to 250 might be at the factory at home and even split over three continents at certain races. This is not only about cost although there are obviously considerable savings in not sending 200 additional crew to Australia in business class.

According to Dario Rossi, Riedel head of Motorsport, team strategists feel more relaxed and are better able to perform and make judgements within minutes than they were when crowded around the pit lane and far from home. What’s more, via an MPLS (a high performance telecoms switching network) which runs on RiLink, teams can respond instantly; the delay is 300 milliseconds from overseas and just 10ms (tenth of second) in Europe, which is handy given that lap times are often decided by that amount.

The art of data interpretation

The remote working of more and more crew is only set to continue. “There are more catering staff than crew in some teams,” says Rossi, only half-jokingly.

“But the importance of data lies in the interpretation,” he adds. “Teams have to try and interpret what the driver is feeling and saying and that feed that information into the data to come up with minute refinements. This is often an intuition, something you cannot get from a machine but only from the brilliance and experience of strategists and designers.”

Naturally, security of this data is essential. While the FIA require a range of data to be shared with them and the FOM need it in order to use clips in the host broadcast, teams want cast iron guarantees from Riedel that their own voice and data integrity will not be compromised.

“The room for failure is zero tolerance,” says Serschen with barely a flicker of irony. “There has never been a break down in this security yet.”

That failsafe approach is nowhere more critical than in the the safety and medical cars whose intercoms Riedel also supplies. A signal has to be guaranteed from these vehicles so there are not one but two analogue radios as back-up in each in the event of a catastrophic failure of the digital system.

There are also broadcasters to consider including ORF and RTL, which also uses RiLink to provide bidirectional links between their RF cameras race side and the broadcast station in Cologne. Riedel provides them with access to each driver’s audio link. Each team manager has a button which allows them to switch their team’s audio between on-air and off-air. Broadcasters are given the peace of mind that if they are receiving the audio then they are clear to TX live.

The command centre, or ‘brain’ as Rossi refers to it, was repackaged from a series of flycases in 2013 into a single complete flyaway system. It’s a fully redundant unit with its own generator and contains Cisco routers with servers loaded with Riedel software, which pulls in all the information for FIA race control. When it leaves the track just the fibre and the power cables are unplugged; the computers stay locked and operational. It’s an expensive piece of kit and unique, but it’s cut down the amount of moving parts that need assembling/reassembling.

Aside from video/audio from the FOA cameras, the ‘brain’ takes in feeds from the onboard cameras, radio comms, team telemetry and the 22 CCTV cameras that line the course and pit lane all time-stamped on arrival. The car information excludes engine data but includes braking, gear change, pit lane limiters and other information which the race steward might use in event of a yellow flag incident. Since this needs to be decided in race time, when an incident occurs a Riedel operator can take a snapshot of the relevant information and hand it over to the FIA.

Advances for Riedel looking ahead include a new version of TETRA and improvements to all its components, making them lighter and more rugged.