Live from The Ryder Cup 2020: Sky and NBC collaborate to produce enhanced coverage of the ‘biggest event in golf’ 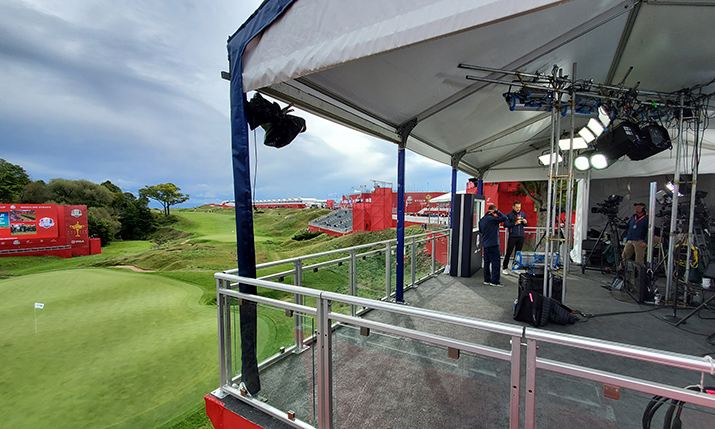 After a 12-month hiatus, the 2020 Ryder Cup begins today (Friday 24 September) as Team USA and Team Europe square off at Whistling Straits in Kohler, Wisconsin. It’s not only a significant and much-anticipated sporting event, but it also marks the first Ryder Cup where Sky Sports and NBC Sports are part of the same corporate family and collaboration will play a big part in the coverage, according to Sky Sports director of golf Jason Wessely.

“Both units are very excited to be broadcasting it for the first time in three years and to be working together and talking together,” says Wessely.

Not only to make sensible efficiencies and environmentally responsible savings but also to pool resources so that the viewer gets an enhanced experience.

“Collectively we’re stronger together and it’s very exciting looking at the future of golf broadcasting as we work together with each other and partners like the European Tour Productions (ETP) and PGA of America.”

The biggest area of collaboration will be around the Golf Channel’s “Live From” show which has become a staple for golf fans, especially at the Majors and events like The Ryder Cup.

“We worked pretty hard to get ‘Live From’ throughout the season onto the Sky platform because it’s a nice product that has a continual news flow for the Sky customer,” says Wessely. “So, we’re going to join forces and throw to a Sky set and then go back and forth to the ‘Live From’ Golf Channel set and give a complete, comprehensive show that throws back and forth between the two groups.”

“Nick Dougherty and Paul McGinley will be there talking about the atmosphere as the crowds get loud. The viewer will feel as though they’re in the heart of the action.”

Wessely says it’s been a lot of work with ‘Live From’ coordinating producer Matt Hegarty and his team “but we’ll be able to have the American take and the European take on things and hopefully over the next couple of days we’ll find a really good rhythm with a dovetailing effect between the two units. There is also a different stylistic difference that will be interesting to watch.”

The core of Sky’s coverage for the competition will be the world feed which will be produced by IMG and ETP. Telegenic’s TWiz production trailer will serve as the broadcast hub on-site, complete with commentary booths and technical facilities that include audio mixing, Simplylive operations, and more. 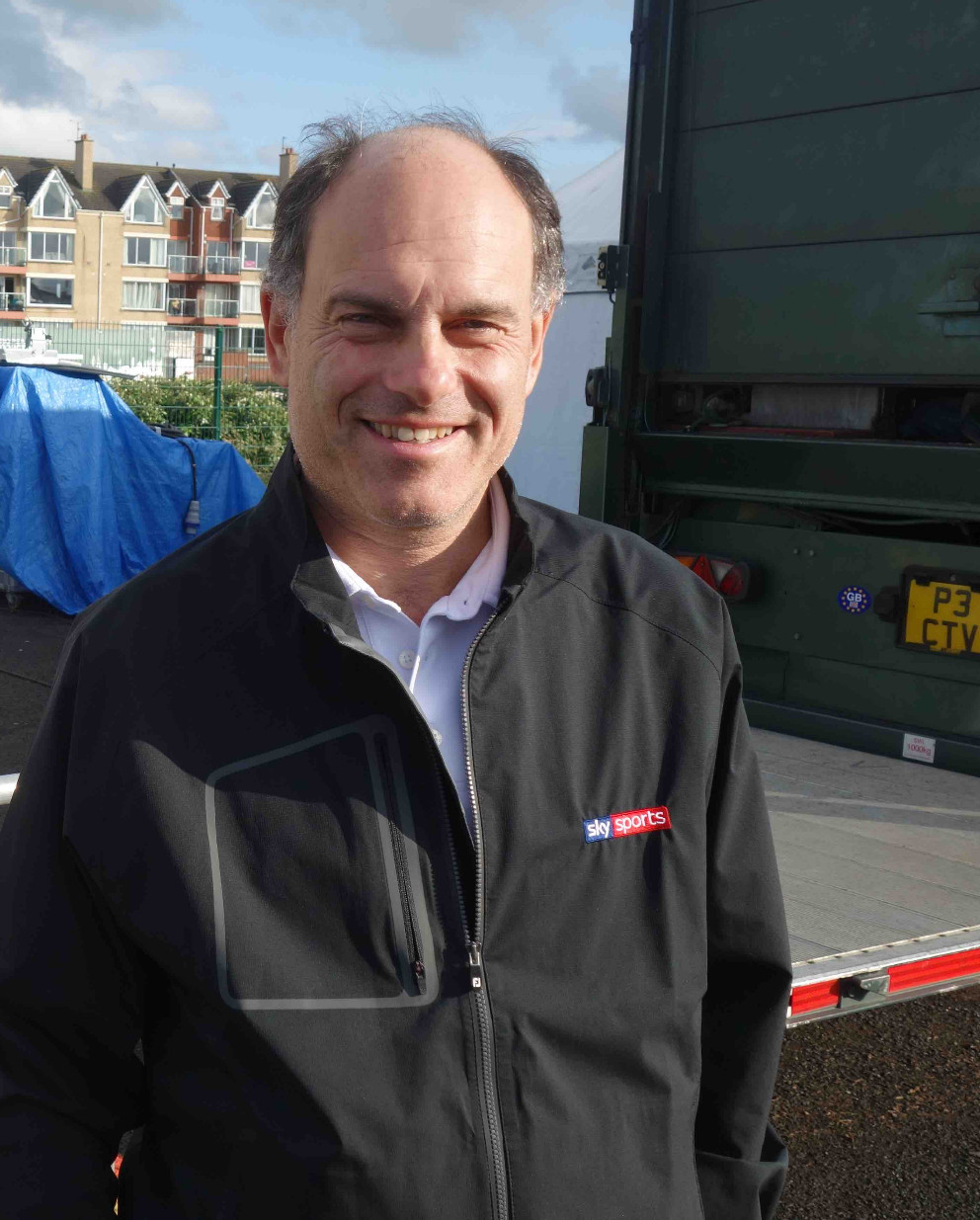 “It’s a very clever truck that’s been designed purposefully for Sky, so it’s got office space, it’s got a green room, it’s got a commentary booth, it’s got the sound mixing, and it’s got the operation for the touch screen,” says Wessely.

TWiz historically has been used week in and week out for Sky’s PGA Tour coverage but the pandemic put a pause on operations that didn’t restart until August for the Fed Ex Championship. So having it back into the mix will allow for around 50 signals to be sent back home to Sky’s production facility in Osterley Park outside of London.

“The workflow is split between the Telegenic truck on site and two galleries back at Sky that are essentially working throughout the week,” explains Wessely.

“The main gallery will look after the main coverage Friday to Sunday and a second gallery will look after ‘Live From.’ That gallery is PCR 35 which will curate the ‘Live From’ programme and deliver it to transmission while gallery 5 ends up being the content generator. The two are working in tandem and one challenge is just fitting into the various corporate workflows back home as we have just over 40 people working here at Whistling Straits. But back home we have as many as 150 people working at Sky Studios.”

“Twenty minutes before the [competition starts] we will go our separate ways from the Golf Channel and our presenting team will be down at the first tee alfresco-like standing on the grass,” says Wessely. “Nick Dougherty and Paul McGinley will be there talking about the atmosphere as the crowds get loud. The viewer will feel as though they’re in the heart of the action.” 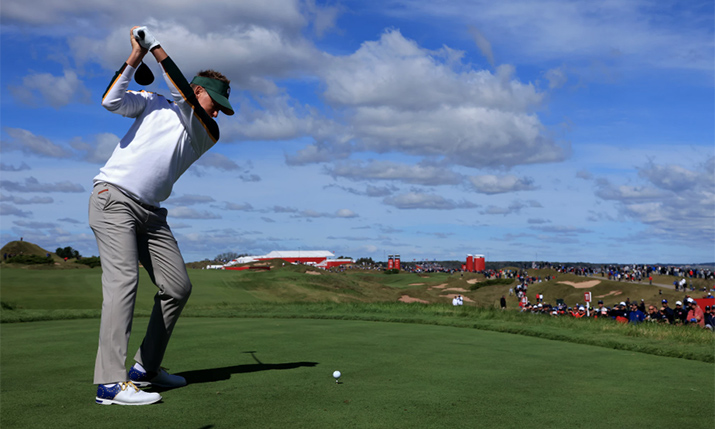 Ian Poulter plays his tee shot on a practice round ahead of The Ryder Cup. Picture: Andrew Reddington/Getty Images

Once the action starts the world feed will be at the center of the Sky offering and the PGA Tour Entertainment Group is also filling in gaps that were created due to the need to send over as few people as possible. Four or five RF cameras will also be key to the coverage, cut into the world feed which will rely more than ever on NBC’s coverage.

“We are truly doing a joint world feed together, so we’ll need to know where NBC is going, when commercial pieces are coming in, etc.,” says Wessely. “It will rely on very good communication between Tommy Roy at NBC, ETP, and Sky.”

In recent years Sky has also embraced Ncam to deliver augmented reality video captures of Team Europe golfers into the studio environments and this year is no different. Players are captured by standing on a pedestal in a green screen environment and then a Trackman camera system rotates around the player and captures them from all angles.

“Unless the camera moves you don’t get the 3D aspect to it,” says Wessely. “We will also use a SteadiCam in our studios and a pan rail so the players get sort of beamed up into our studio and we can put our presenter in there and make it look like the players are being transported into our studios.”

Something new this year onsite are touchscreens that will give the presenters more control over video highlights and other elements.

“When you have the touch functionality it’s crucial that the presenter is really engaged and bought into that process,” says Wessely. “Operating our touchscreen from on-site takes the concern away that everything is going on at Sky.”

“The American NBC crew have first dibs if it is an American win, and the Sky crew will have first dibs at the European wins. And if it’s a half [point to each team] we will talk to our separate nation’s first and then switch over and do the other.”

One of the unique aspects of The Ryder Cup is that matches can end well before the 18th hole and that means that post-match interview plans must be more flexible.

“The players don’t want to come back to a central hub to do an interview, they want to finish their match and go and watch the next match,” says Wessely.

“We will send our on-course reporters with most of the groups and an RF camera so when the match finishes, we interview that the winning players on the green. The American NBC crew have first dibs if it is an American win, and the Sky crew will have first dibs at the European wins. And if it’s a half [point to each team] we will talk to our separate nation’s first and then switch over and do the other.”

Another stalwart at golf majors for Sky Sports has been legendary golf instructor Butch Harmon. “He’ll be commentating from Las Vegas, and we’ve also got two commentators, Ewen Murray and Rob Lee back at Sky.”

All involved will be part of a golf event that resonates on both sides of the pond. In recent years Team Europe has dominated the proceedings but this year, on paper at least, they come in as underdogs.

“The Ryder Cup is the biggest event in golf because it brings in a separate audience as it’s a simple concept of us versus them,” says Wessely.

“It brings in fans from across other sports like football fans, cricket fans, rugby fans, tennis fans, and even Formula One. And already there’s a palpable sense of excitement that Europeans are truly the underdogs and that winning away will be a huge achievement to win away.”