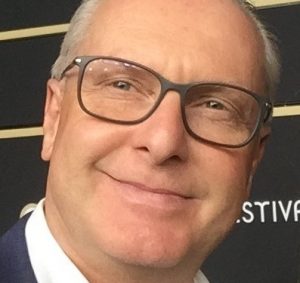 With the recent launch of its new UHD 42 OB vehicle – which was built by leading systems integrator Broadcast Solutions GmbH – NEP Switzerland has doubled its 4K production resources, allowing it to cope with all the requirements of the 2017/2018 Swiss Raiffeisen Super League season (RSL).

A few months on from its successful debut, NEP Switzerland managing director Reto Osterwalder sat down with SVG Europe to discuss the current outlook for 4K in Switzerland, its own activities in UHD, and the design specifics of UHD 42…

How would you assess the current level of demand for 4K in Switzerland?

The pay TV channels in Switzerland, which play a significant role in the domestic broadcast market, plus the future-driven infrastructure push the 4K topic decisively. This impacts not only the Swiss premier football league, of which we produce all matches in 4K, but also in other sports as well, such as athletics or ice hockey. The Swiss pay TV market is very vibrant and we will start working with a new channel this year. To do so we are currently building new studio and playout facilities, of course with full 4K capability.

In what ways has the demand for football in 4K developed over the last 12 months – and what are your predictions for the next 12 months?

We started to produce the Swiss Premiere League Football, Raiffeisen Super League (RSL) in 4K for season 2016/2017, which is quite early. Our customer Teleclub asked us if we would be ready to start with 4K and we developed our first UHD OB Van UHD 41 with maximum speed, to produce Swiss football for Teleclub in 4K. For season 2017/2018 we doubled our UHD tools with the new UHD 42 truck. Since July this year we have produced around 140 matches in 4K, which is quite unique in Europe, I think. Additionally, we are producing the Brack.ch Challenge league, Swiss’ second division.

What are the design elements that distinguish this particular OB truck from others with 4K capability? 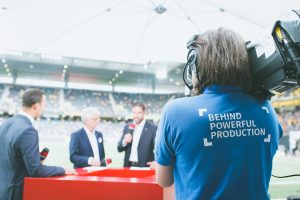 Our new UHD 42 is an example of the Streamline resp. Alphaline OB vans of German systems integrator Broadcast Solutions. They are developed as a series and are nearly off-the-shelf products. Our new OB van is developed on the basis of an Alphaline A16. With this single expanding truck we have a flexible yet reliable large production tool for day-to-day use. We have two production rooms and two slomo areas plus a lounge area for guests or VIPs; all in all, the OB offers 23 workplaces. We can develop our workflows easily and, for instance, produce the Raiffeisen Super League with only one production room. This keeps teams small and flexible. The similar workflow design of the Streamline and Alphaline OB vans results in shorter setup times and trainings. The teams working in one OB van very quickly feel “at home” in the other one, which makes things very much easier and is a cost [benefit], of course.

What were some of the specific design challenges that you addressed during the design and development phases?

We wanted an OB van that is as flexible as possible, of course. But additionally we had a narrow time-frame for building UDH 42 – round about six months. It goes without saying that we needed a production tool that can switch easily between producing in UHD and HD, or produce both simultaneously, which is what we do for RSL. [We required] provision for a 16-camera quad-link 4K/UHD or 20 camera HD workflow, and the highest possible grade of flexibility for any multi-camera and multi-program HD / UHD operation thinkable. Since we produce the RSL tri-lingual we needed a powerful audio section and a sophisticated routing [infrastructure] to deliver the signals to all the different sites.

Finally, to what extent do you think that a new ‘televisual language’ is being evolved to make sure that the full possibilities provided by 4K/HDR sports can be realised?

4K/HDR not only changes the way television is viewed, but also how it is or will be produced. At the production side 4K/HDR will change workflows, cameras, viewing angles, composition, editing or style. But this has just started. With the further adoption of 4K/HDR on the consumer side, this development will go on. It is one thing to have the technology, it’s another to use the new possibilities to create stunning images. The technology and know-how is here. It will be interesting to see how user habits and technology will change, and how this will affect the production – or whether this interplay will work the other way around.