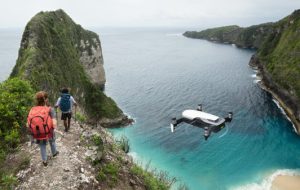 Civilian drone specialist DJI has reminded UK drone pilots that as of today (30 July), it is a criminal offence for drone pilots to fly drones above 400 feet (120m) and/or within a kilometre of airport boundaries, unless prior permission is obtained from the CAA.

“Flying drones is fun and the vast majority of drone pilots, whether for pleasure or commercially, already fly safely and responsibly. However there are a small handful of individuals who choose to misuse drone technology and tarnish the reputation of their fellow pilots. These new laws will grant the appropriate authorities more power over a few bad actors and allow responsible users greater freedom,” said Christian Struwe, head of public policy Europe at DJI.

“Drone technology, despite being very much in its infancy, has already brought numerous benefits to both society and the economy; revolutionising fields such as emergency response, construction, filmmaking, agriculture and conservation, allowing professionals to do more work faster, safer, more efficiently and at a lower cost. With the help of responsible drone pilots we can continue to highlight the power of drone technology.”

The new laws are also aided by DJI technology, which has been implemented in drones and through its DJI GO apps since 2014. Automatic altitude limitations within the apps are set at 120m (400ft) as default and can only be changed if the user makes the conscious decision to do so.

When first introduced in 2014, DJI’s geofencing system used GPS positioning to warn or restrict drone pilots from entering locations which pose national security or aviation safety concerns, such as airports. The system was further enhanced in 2016 to include the capability for live updates of temporary flight restrictions and other changing hazardous conditions such as wildfires, while also adding flexibility for drone pilots with authority to operate in those locations.

Drone enthusiasts who want to stay up to date with drone regulation around Europe and bring their own proposals to drone policy makers are encouraged to join The Network of Drone Enthusiasts (NODE), a new group dedicated to representing the interests of responsible drone pilots across Europe.