OBS TV, the UK division of Irish outside broadcast and facility group Observe, is building a new 30-camera channel truck after a year of establishing its place in the marketplace. On the road in 2015 the new OBS2 will be UHD-capable, according to UK Executive Director John Hunt. “Because of the demise of SIS Live we felt there was an opportunity for us to get into the market properly and that a large scale truck was needed to really tackle the bigger jobs. While we can build a niche market on our mid-range vehicles, the reality is that you have to have that size of truck if you want to compete at the very top.”

OBS TV’s move into the UK in August 2013 preceded the decision by SIS Live to exit the market. It picked up work this year including England Women’s World Cup Qualifiers and Women’s FA Cup Final for Sunset + Vine/BBC; the National Road Race Championships for Vsquared TV; international rugby presentation for TV NZ (New Zealand) and Sky as well as Viking Live for the British Museum and work for the BBC’s One Show.

“Year One was all about getting our name and reputation out and about,” he added. “We felt there was a market for a mid-range, high quality boutique-style OB. We felt that maybe the industry had lost a little bit of touch through having big players rather than mid-sized ones.”

He continued: “There is always a danger that with the bigger companies the person doing the contract negotiation and the recce may not be the same people who do the job. By default the bigger you get the more likely that is to happen. I’m not passing judgement on whether that’s good or bad, it’s a fact and it means there is a market for companies to offer a more personalised experience. Those who negotiate with the client will be the people who come on the job and the feedback we’ve had from producers is that they appreciate that.” 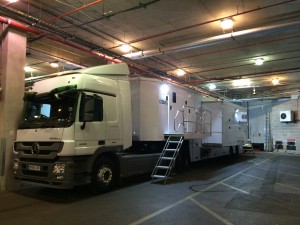 OBS1: The company is building a new UHD-capable OBS2 truck

Megalink 1, a 4 camera channel SNG truck, has also travelled over from Ireland but the arrival of OBS2 will make a big statement of intent. This unit will include 30 camera channels and 4 Super-Slos, an Evertz EQX Magnum Router, 64-monitor production stack, MVS-8000X switcher, Calrec Artemis Shine Sound Console and 32 MADI Interfaces and 10x EVS XT-3 8 channel servers. For graphics, six Vizrt channels are provisioned.

The outlook for 2015 according to Hunt – the former director of operations at RTE — is one of readjustment to SIS’ departure alongside, “preparations for the inevitable introduction of UHD with questions about how to pay for it, and the further development of web-streamed content.”