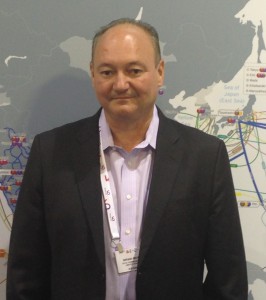 Brian Morris might only be six months into his new role at Tata Communications, but his media industry pedigree encompasses nearly three-decades of high-profile roles at Siemens Telecommunications, Scientific Atlanta and Cisco. During IBC 2014, SVG Europe caught up with Morris to reflect on career highlights and the current plan to expand Tata Communications’ scope with a comprehensive suite of media centric hosted managed services.

Looking back over your  career, what would you say have been the key stages along the way?

Right out of university I spent the first 10 years of my career at Siemens, firstly as a hardware designer and then on the communications side. Eventually I started to take an interest in the  delivery of video  to the home over fibre networks, and it was through this development that I got connected with Scientific Atlanta, based in Atlanta Georgia. Ultimately, I went to work as their VP R&D and operations from January 1995.

In 1996 Scientific Atlanta purchased a company called Digital Video Systems out of Toronto Canada, which specialised in video delivery solutions. We integrated that business and grew it from about 20 million to a few hundred million dollars. Technologically, it was a really fascinating time; we went through the analogue to digital conversions, from MPEG-1 to MPEG-2 to MPEG 4, and SD to HD. But [equally] important was the proliferation of the company globally, with clients such as Discovery Communications, Turner and HBO as they globalised  distribution of their content.

In 2005, Scientific Atlanta was acquired by Cisco, where you became VP global business development for their Media solutions…

Yes, I was involved in some great projects, including networks for the US Government and the Armed Forces Radio and Televisions Services (AFRTS), where we connected military bases around the world, even those in the middle of Afghanistan. It was during this period that I was contacted by Tata Communications, at precisely the time when the industry was accelerating use of hybrid satellite terrestrial IP infrastructure for the distribution of media content – and the efficiencies resulting from that. I started to do some research on Tata and discovered that our network is the largest subsea fibre network in the world… it literally spans the earth. So taking on a role within Tata Communications supporting the evolution of moving media anywhere, on any device, any time over our global network was a very exciting proposition.

What do you see as your initial priorities at Tata Communications?

If you look at the media industry as a whole, we believe that the industry is in fundamental transformation where traditional delivery infrastructure is moving towards technologies that enable virtualised infrastructure with IP-centric applications. Additionally, OTT-type applications are also becoming evermore important in the industry. We are also seeing the proliferation of mobile devices on a global scale with the use of more video and media  applications

So at Tata Communications, we are assembling the next generation of hosted media services supporting  contribution, distribution and OTT applications.  We are creating these managed services for people who want to distribute their media assets anywhere in the world to any kind of device, in the most efficient manner. We are already well down the road of being able to offer complete end-to-end managed services from ingest to redistribution, as well as OTT and so on.

In terms of sports, our strength at the moment is mostly on the contribution side; for example, the work we do for  Formula 1. So the objective now is to provide the managed services that support the complete workflow and requirements of managing content on a global basis. Of course, it is applicable to all content owners and service providers as well as  for sports applications.

Which pieces of the puzzle do you already have in place?

We have many of the solutions today, such as Video Connect, Content Share, Content Vault, file acceleration, approval technologies, transcoding technologies… Lots of different pieces are already in position and we expect to have a complete offer to market in six months’ time.  But most importantly, we have that wholly-owned network that provides connectivity on a global basis.

Focusing specifically on one of the major topics of this year’s IBC, what is Tata’s current thinking around 4K?

It’s a timely question as we have just successfully completed a cross-continental distribution of 4K during the practice session of the Formula 1 Grand Prix in Singapore. We brought feeds from HD and 4K cameras to Biggin Hill via our network, and gave F1 rights’ holding broadcasters a chance to compare  what HD and 4K looks like for F1.

In terms of the outlook for 4K adoption, the costs do need to come down generally, but I think this will happen a lot more quickly than with HD. That conversion, from SD to HD, was really a 10-15 year process, but I think the move to 4K will be much quicker. Already broadcasters are taking HD capture out of 4K and making the most of the opportunity to zoom into slo-mos, etc, and I can see a lot of that happening in the future.

Apart from the size and scale of its network, what aspects do you think really endear Tata to customers worldwide?

I think the sheer stability of the organisation resonates massively. We have put together a global content delivery network, and this achievement confirms to people wanting to work with Tata that the company has a firm commitment to the industry. There is a long track record of a focus on service, quality and longevity that is very important. Our commitment is truly global – and will continue to be so.