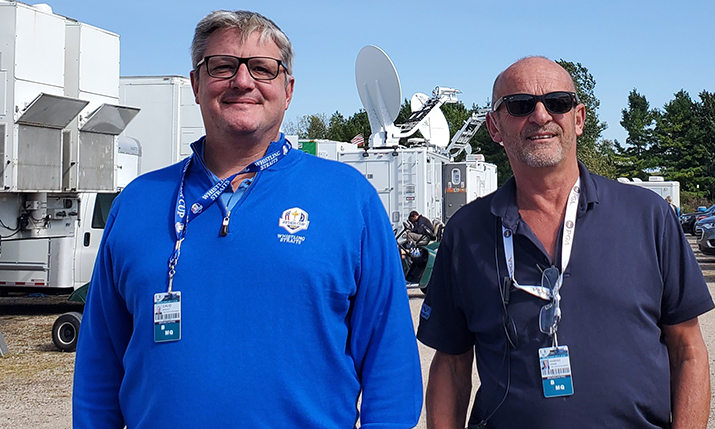 The amount of passion both on and around the course during a Ryder Cup is unique in the world of golf and arguably all sports. It also gives rights holders like NBC Sports and Sky Sports the ability to tilt the emotions and coverage toward their home fans. But what about the world feed? David Mould, Director of Live Television at the European Tour, says the goal was simple.

“It’s our aim to make sure we tell the story of the Ryder Cup,” says Mould. “We try to show a balanced view and the hardest thing for us is that every country wants to see their favourite player.”

Mould previously produced the Ryder Cup coverage for European Tour Productions (ETP) so he is well versed in the ins and outs of a normal year but given the postponement last year and the ongoing concerns over COVID-19 it became pretty clear in mid-July that this year’s production effort would need to be very different. One important thing that happened last November that impacted this year’s event was the PGA Tour’s new alliance with the European Tour and as part of that, buying a stake in European Tour Productions. That opened the door for the ETP and PGA Tour Entertainment to work more closely.

“At the time we were planning to bring over 180 people here from the UK and we just couldn’t do that for visa issues and COVID reasons,” he explains. “So, we looked to pivot around and work out the next best solution which was to go to PGA Entertainment for some of the producers, directors, and people for other positions like submix areas or EVS operators.”

The meetings to figure out a plan for the world feed involved the ETP, CTV, and the PGA Tour Entertainment team.

“We came up with a plan and then worked together from there to find solutions for everything,” says Mould.

For example, only two camera people made the trip over from the UK with about another 18 American camera people filling out the world feed team.

“Usually, we’re sitting side by side with NBC and we’ll have everything, all our own cameras,” adds Mould. “But now we sit on NBC’s coverage for around 65% of the time, although that changes hour to hour. For example, they have more breaks an hour than we do, and we have to fill that time. But NBC have been very helpful and flexible to help us deliver the product we want.”

“Everyone is learning new workflows and new technology and they’re up for the challenge and everyone is together.”

This is following on from The Open at Royal St George’s earlier this year where ETP provided the world feed for NBC to rely on back in the US where they couldn’t travel over in full. “NBC have been really collaborative in helping us wherever we need. I think the fact that that we helped them out at The Open and now in turn they are really supporting us here in the US is really positive for the future.”

Hamish Greig, CTV, CEO, says that with NEP providing the technical backbone the only thing he needed to bring over was a VPN PC to allow for the MST graphics team at Whistling Straits to tie in comms wise with their team at Malvern via CTV’s production facility at High Wycombe in the UK. He also brought over a NAS to store the archive.

“It’s just easier to bring it here, load it, and then take it straight back,” he says.

NEP’s ND4A was the main production and graphics area for the world feed while the B unit handled main submix EVS iso operations and shading. The C unit handled audio effect submix and also news and content people work there as well as in a cabin where they have their own laptop editors and ENG equipment. BSI, meanwhile, provided six RF cameras plus Xmo for the world feed as well as six effects mics and two announce kits.

“NEP has been so good to us through the whole COVID thing, and they kept me in the loop a 100 per cent and then delivered really, really well,” he says. “They’ve done a really good job for us and it’s a good relationship.”

The hardest parts of the production had nothing to do what happens on the course as the technical infrastructure and production personnel make sure those aspects are all covered. But the mixing of an American and European production team means they can each call the same thing something different (live vision mixer vs. production switcher). So, everyone is getting a crash course in sports production jargon.

“It’s all different and it’s fascinating to me to talk about things like wipes or vision mixers,” says Mould.

Will the efforts this year, born out of COVID, have a lasting impact on how Ryder Cups are produced? Mould believes so as many of them go lock-step with a desire to make production of golf events more sustainable. Remote work, like having the ARL augmented graphics team working from New Zealand, is a perfect example of how things might go.

“Everyone is learning new workflows and new technology and they’re up for the challenge and everyone is together,” he explains.