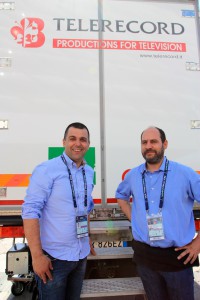 Sky Italia coverage of Champions League begins a busy summer for the network and also ends an era. Beginning next year, the network will have exclusive rights to the Champions League. “Next year, it will be a different ballgame,” says Riccardo Botta, Sky Italia, head of sport production and operations.

This year’s Champions League coverage involved a studio show and pitchside coverage (with one unilateral camera shooting reverse shots of the action) that required six cameras provided by Italian OB provider Telerecord, which was on hand for technical support.

“We can reach Munich by car, and it is much better to bring the Italian crew and Telerecord because it works out very well, as they have been doing the final for us almost every time,” he adds. “And Telerecord is one of the best OB outfits in Italy as it is family-run and all the cameras are connected using fibre.”

“There’s a different vision for a director if they are German, English, Italian, or Spanish,” he explains. “Italians prefer their coverage a little bit hot [and with more cuts] while, in Germany, the direction can be a little bit cold.”

Carosi directed the Champions League final in 2009 when it was held in Rome so he is well versed in the challenge of staying neutral.

“You need to balance between one team and the other, but it is more difficult if [a team from the home country is playing],” he explains. “For example, here they showed the Bayern team bus for the complete drive from the hotel to the stadium while the Chelsea team was only shown driving up the last 200 metres. That’s just one difference.”

Andrea Picchioni, Sky Italia, technical manager, says the production team arrived three days before the final for cabling and positioning cameras. Later this summer, Picchioni will oversee London Olympics studio operations for the 2,200 hours of live coverage. And next month, he will be involved with the broadcast of the European Fencing Championships.

The Champions League rights next year will include 128 matches to be broadcast in HD and is an example of a new approach to rights that has the network at the centre of the Italian sports fan’s life. The network also has the next three Olympics and the FIFA World Cup in Brazil in 2014, and, just last week, it added FIM MotoGP World Championship rights.

Beginning with the 2014 season, which will be offered across all Sky technology platforms, including FTA TV, pay TV, Internet, mobile, and Sky Go, the network will broadcast all 18 races of the three classes (MotoGP, Moto2, and Moto3) of the Championship in HD, a first in Italy. And Sky will also handle the production of eight of the 18 races.