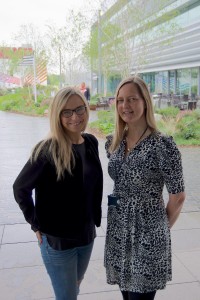 Traditionally. sports broadcasting has been dominated by men, and some sports, such as boxing, have been real male preserves – both in and outside the ring. However, in the same way that women boxers such as Katie Taylor and Nicola Adams now draw considerable crowds, women are also coming to the fore in even the most ‘macho’ areas of TV sports.

One of the broadcasters leading the way is Sky Sports, which now has more women in its boxing production team than men, including its lead boxing director, Sara Chenery, and production manager, Jennie Blackmore, who took charge of last weekend’s Anthony Joshua vs Vladimir Klitschko heavyweight world championship event at Wembley Stadium.

Sky has both Women in Sport and Women in Leadership initiatives to make sure that women get the same opportunities to be interviewed for senior roles as men, so that they don’t feel there is any position that they can’t go for because of their gender. “There’s a very conscious effort as a company for us to make sure that everyone has the same opportunities regardless of anything, as long as they’ve got the same experience and the same qualities that fit the actual job description,” explained Chenery.

In its boxing team there are women at all levels, from the boxing co-ordinator/floor manager, who is a boxer’s main contact with the broadcaster, to the assistant producer/reporter, to the presenter. “Out of all the sports teams at Sky we think, percentage-wise, we probably have the most female members of the team,” said Blackmore.

“The sport itself is very macho, sexist, however you want to look at it, but things are changing everywhere, thankfully for the better,” said Chenery. “I worked on boxing since 1996 so I came up when there weren’t many women here.”

She started as an assistant producer and one of the most awkward things was going into a boxing gym “and walking through a dressing room with 20 naked men,” something a man “wouldn’t think twice about and, obviously, suddenly there was an issue there. I think it took a while for some of the promoters that we don’t deal with anymore to realize that you are in a position of authority – not through anything unkind, but it’s the whole unconscious bias that used to exist a lot more then, which is what Sky are making a massive effort to make sure doesn’t exist. I think people get confused and think that sexism in itself is people being disrespectful to women and as a woman I don’t think it is always that.”

The unconscious bias that still exists in boxing is “where people don’t realise that they’re valuing your judgment differently because you’re a woman.” She feels this is changing, albeit slowly.

Previously, it could be much more difficult. “I’d go to a site survey meeting and people would ask questions of everyone around me and then the team that were working with me, such as scaffolders or whoever, who are predominantly all men (I’d often be the only woman there), would then go: ‘OK Sara, what we do then?’ and ask me the questions. Then I’d answer it and then the other people then ask them a question again and you’d get to the point where you just think, ‘Hello’. I’d just make a joke out of it, like: ‘Oh, that’d be another question for me then.’ It never offended me, but it wasn’t really right and luckily that has all gone.”

Chenery feels she’s lucky to work for Sky, which noticed that there weren’t as many women in senior positions as men and set out to do something about it, “not by reversing the other way and just randomly giving women things they don’t deserve,” but by “making sure that everyone has the same opportunity, so if there’s ten senior jobs that you know 50% of the people interviewing for it will be men and 50% will be women, and the right person will get it regardless.”

She is involved with the Women in Leadership initiative, and makes a conscious effort to make sure that runners coming through or other junior female team members now know that they will get the same opportunities as a man, and is finding that the thought that being a woman might hold them back doesn’t even cross their minds. “That’s when you know you’ve won.”

The proportion of women in all the jobs in Sky Sports is increasing, and even unconscious bias in boxing is declining. “Now I feel as valued as if I were a man doing the same job. It was tricky for a few years, but I think you know as you do a good job and you’re very firm about what your expectations are and you deliver on what their expectations are of you, whether it be promoters or other television providers, then there’s never any confusion,” she said.

“Occasionally, when foreign broadcasters come in who perhaps have a different structure where they are and it’s a male sport and more men do it, they;ll be quite surprised when they meet with Jenny and I as to what our roles are and what our responsibilities are, but it will just be genuine surprise […] because it’s not what they’re used to; but it’s not an offensive thing.”

Any bias has not just been confined to the sport, because the technology side of TV has also traditionally been a male bastion.

At many of the foreign broadcasters she deals with, particularly in America and Germany, most of the production managers are men, so when they have meetings like a recent one in Wembley with broadcasters, promoters, set up and construction crew – where there were 100 to 120 people in the room – only a handful were women (most of whom were Wembley logistics staff), with Blackmore and Chenery being the only females on the broadcast side.

“There is still a majority of men in our positions in broadcasting, but like Sara said at Sky that is absolutely changing,” said Blackmore. “There are a lot of women coming through in both our positions and other positions in the production teams.”

Having worked at Sky for 25 years, Chenery has seen massive changes, and one question she’s been asked is: “‘What would your advice be to a young woman starting to work at Sky?’ and I just said to them ‘exactly the same as it would be to a young man who came and asked me for advice’; and that’s the point,” she said.

“You have to be mindful of it as a company because you need to work out why aren’t there women in these positions, but you can’t suddenly start just creating a special treatment for anybody regardless,” she added.

“You can’t shoehorn women into positions that they don’t want,” interjected Blackmore. “You have to have the right credentials for what you do, and there’s no point trying to create equal ratios for the sake of it. You choose the best people for those jobs and you put people in the right positions.”

Chenery likes that the mindset at Sky comes right from the top, namely CEO Jeremy Darroch. “He’s very conscious of making sure that where people have got disabilities, or because of gender, or whatever, that everybody just gets judged on what they do, and I think if that message is getting through to me and Jenny and filtering down to everybody else, then you know the only reason you’ve got to moan for not getting a promotion or getting the job you want is because you’re not good enough to do it.”