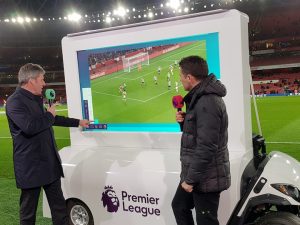 The EPL is the world’s most popular with Premier League matches now beamed to 189 countries and watched in more than a billion homes. On January 3 2018 the SmartCart SVX mobile touchscreen broadcast system was deployed as part of PLP’s festive broadcast coverage of the Arsenal v Chelsea match. The exciting and hard-fought match – which concluded with a 2-2 score line – took place at the Emirates Stadium, London.

SmartCart SVX was operational pitch-side, providing the live on-site presentation, analysis and interviews that are regarded as being crucially important for enhancing fan understanding and engagement.

SmartCart founder Gil Cowie comments: “The SmartCart SVX mobile touchscreen broadcast system is an ideal solution for today’s budget-challenged sports broadcasters, adding an exciting new dimension to existing coverage or allowing them to have a live interactive presence at the game for much-reduced cost without sacrificing quality. The system is equally applicable whether it be a full remote production working back to an existing studio base elsewhere or to augment a lower-cost on-site outside broadcast production solution. SmartCart has operations in Europe and USA and continues to grow its presence.”