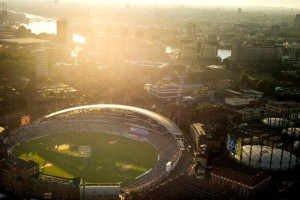 An aerial view of play between England and India from the MRF blimp during the npower Fourth Test at The Kia Oval, London.

The present and future of Olympic Games coverage will be the subject of extensive discussion at the next SVG Europe technology summit. FutureSport 2015 will take place on 2 December at one of London’s most important sporting venues, The Kia Oval.

Rio 2016 will pack the equivalent of 42 world championships into 17 days of competition, bringing 10,500 athletes to the host city. Preparations are now at full speed, including detailed fit-out of the 85,400 square metre International Broadcast Centre at the Barra Olympic Park housing Host Broadcaster Olympic Broadcasting Services (OBS) and the Rights Holding Broadcasters (RHBs). More than 12,000 RHB personnel will be accredited, while the number of OBS personnel will be in excess of 6,600 during the Games.

In a key session, OBS CTO Sotiris Salamouris will be in conversation with SVG editorial director Ken Kerschbaumer and will discuss the current state of preparations, including planning for the Multichannel Distribution Service (MDS) and the Olympic Video Player.

The FutureSport 2015 agenda will also include a preview of the IOC’s forthcoming Olympic Channel. Plans for the service are continuing to gather pace, with a dedicated team of 100 people expected to be in place and working from a broadcast centre in Madrid (with commercial support in Lausanne) by the end of next year. The new TV channel will offer Olympic sports 365 days-a-year as a 24 hour OTT service, with a mixture of live sports, stories about athletes and volunteers, news, social media integration and more.

In this special presentation, a senior OBS representative will outline plans for content creation, technology platforms, and the unique opportunity for Olympic movement stakeholders.

For a full programme, and to register, please visit https://www.svgeurope.org/future-sport-2015/.