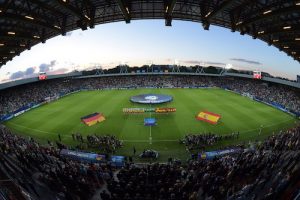 KRAKOW, POLAND – JUNE 30: During the UEFA European Under-21 Championship Final match between Germany and Spain on June 30, 2017 in Krakow, Poland. (Photo by Tom Dulat – UEFA/UEFA via Getty Images)

During the recent final of the 2017 UEFA European Under-21 Championship, where Germany sealed its second title with a 1-0 win against Spain, UEFA successfully completed a full UHD 4K remote production test between Krakow Stadium and Stratford, London.

UEFA hosted the test at BT Sport’s facilities in the Queen Elizabeth Olympic Park on June 30, with the support of SAM, Gearhouse Broadcast, Orange Poland and Level3. The comprehensive series of tests were designed to prove not only the technically viability and effectiveness of a UHD 4K remote production, but also the simplicity and ease for the operators and production teams.

On the trial, André Nel, UEFA’s Senior Broadcast Engineering Manager, said, “This successful test represents a major milestone for UEFA as we continue to innovate and explore remote production solutions ahead of the incredible challenge that future UEFA Champions League, UEFA Europa League and in particular UEFA EURO 2020 – with matches played in 13 different countries – will present.”

For many broadcasters and federations, remote production until recently has been perceived as “technical dream” with little clear operational benefit. However, with the support of their various technical providers, UEFA has delivered a perfect, seamless and cross-European delivery of the solution.

Director John Watts, commenting on the UEFA’s remote UHD 4K coverage of the 2017 UEFA European Under-21 Championship final, said, “Everything was absolutely normal; it felt like I was next to my team in the venue. The communication was without noticeable delay, just like during a traditional production.” 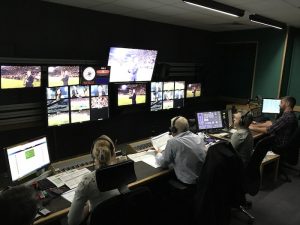 After the installation and setup of two 100G dark fiber links between Krakow Stadium and Stratford, several connectivity tests were completed to measure the quality and speed of the network. Orange Poland and Level3 combined their efforts to provide UEFA with a fully diverse 100G, layer 1 network between the stadium in Poland and BT Sport’s London-based facility. End-to-end testing was completed at the beginning of June, with the dual path network fully operational for the final. The use of two diverse routes and SMPTE 2022/7 hitless switching provided a very reliable solution, which was further demonstrated by the unplugging of one of the two routes, without any effect on the service, during the live transmission.

The bandwidth was used to carry uncompressed UHD 4K signals, offering an extremely fast transport solution with no degradation of signal quality. With less than 40ms of delay at destination, all the feeds were perfectly timed for production switching. All audio signals, including communications circuits, were available at both locations allowing instant and crystal-clear communications, without any obvious difference in location for the corresponding parties.

For UEFA and all participants and guests, the most impressive element to the test was that the overall system delay was far below expectation, and thus the very ‘natural’ aspect of the production, with one of the operators commenting “without being told where we were, we would not have noticed that we were not at the stadium.”