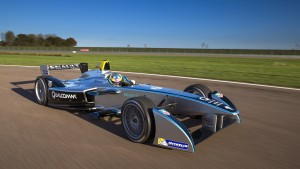 Gigawave on-board camera and live video transmission systems from Vislink will be used at the new fully-electric FIA Formula E Championship to capture real-time close-up action from the race track.

Formula E kicks off in Beijing in September. The championship will comprise 10 rounds taking place in cities around the world, and will run through to June 2015. The series will see 10 teams (each with two drivers) going head-to-head in a race to be crowned the first ever FIA Formula E Champion. With Vislink’s Gigawave technology, spectators around the world will have the opportunity to view a wealth of HD footage from onboard the cars.

Cars competing in Formula E will be fitted with up to four on-board Vislink Gigawave HD cameras, which can be mounted in up to 10 different positions. These micro-sized units will be linked to a Gigawave H.264 on-board transmitter, which can also transmit on-board data and HD video and audio to provide the best possible coverage of the event.

“Formula E is the first FIA championship of its kind, featuring formula cars powered exclusively by electric energy. This is an exciting step forward for motor racing and we’re thrilled to be a part of it,” says Stephen Rudd, CEO of Vislink International Ltd. “Vislink has a strong track record in live sports, delivering on-board systems for MotoGP and the FIA World Rally Championship. We are delighted that Vislink has also been selected to provide HD broadcast equipment for Formula E.”