Wilder vs. Fury II: ESPN and Fox Sports team up on outsize production in Vegas

Fight marks the largest boxing show ever for ESPN, which is overseeing the operation

“I think, without a shadow of a doubt, this is definitely the biggest,” ESPN remote operations manager Kim Bloomstone said of the operation in Las Vegas. “This is our Super Bowl for boxing. There’s no question about that.”

Although ESPN and Fox Sports are collaborating on extensive Wilder-Fury II onsite studio coverage throughout the week and on fight night, ESPN is handling the entire technical setup and execution of the production at MGM Grand Garden Arena on Saturday.

ESPN has rolled out 38 cameras (more than ever deployed for an ESPN boxing production), a 4DReplay system for 360-degree replays, a unique microphone array over the ring, and a horde of other tech toys to bring the ultra-high-profile fight to millions of viewers around the world. 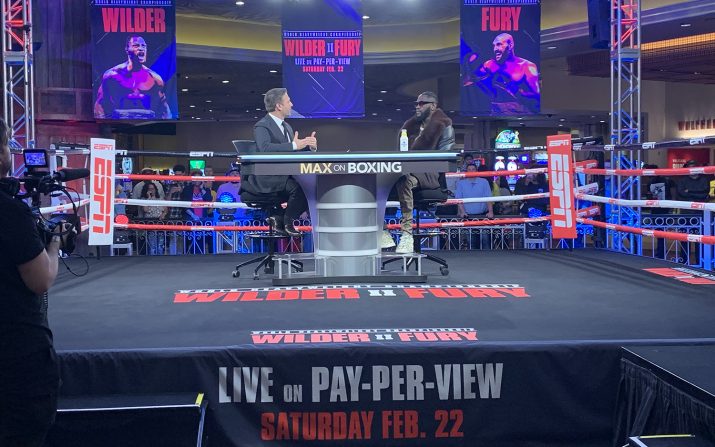 In addition to covering the ceremonial arrival of both fighters at the MGM Grand lobby on Tuesday, both ESPN2 and FS1 (as well as ESPN Deportes and Fox Deportes) broadcast the Final Press Conference on Wednesday and carried the Official Weigh-In at the arena.

ESPN has erected a studio set styled as a boxing ring at the MGM Grand near the KA theater, where SportsCenter on the Road (Tuesday-Sunday), Max on Boxing (Tuesday and Thursday at MGM, Wednesday and Friday from the arena), and First Take (Thursday-Friday) are producing shows throughout the week.

According to ESPN senior operations specialist Joe Rainey, the broadcaster is using the small amount of single-mode fibre available at the MGM Grand to connect the casino set with the main truck compound at the arena, where studio shows are being produced from a control room inside NEP NCP 10 B unit.

“We built in a lot of setup time since it’s such a big [event] with so many different pieces,” said Bloomstone. “We parked trucks Saturday morning and had a two-day compound build, running as much cable as we could, powering the trucks up, interconnecting everything, and making sure it all worked as it should. We ran cable into the casino to the boxing-ring set location for Tuesday, and then we got the arena released to us [that afternoon], so we hit the ground running for setup in there.”

For its part, Fox Sports has brought the FS1 studio show Speak for Yourself to Las Vegas, broadcasting from the MGM Sports Book Wednesday through Friday (including interviews with Fury, Wilder, and a mix of ESPN and Fox boxing analysts). The Wilder-Fury matchup marks just the latest chapter in Fox Sports’ continuing partnership with PBC, which includes 10 events on Fox, 12 on FS1, and four or five PPVs per year.

“We’re excited for this fight because it has elevated the profile of boxing in general, and we’ve been able to promote it on an incredible level in the biggest sporting events like the Super Bowl and Daytona 500,” said Bill Wanger, EVP, head of programming and scheduling, Fox Sports. “It continues the evolution of our boxing program with PBC, where we’re mounting a charge to bring boxing back to the masses and create mainstream stars out of these fighters.”

Fight Night: An epic production of an epic match

When the PPV begins at 9 p.m. on Saturday night, the ESPN production team will have a bevy of production tools at their disposal. Among the most intriguing are a pair of new ‘bumper cam’ POV systems developed in-house by ESPN and installed in two corners of the ring. The units are buried in the mat and feature a Marshall lipstick camera with a wide-angle lens and a stabilised mount. 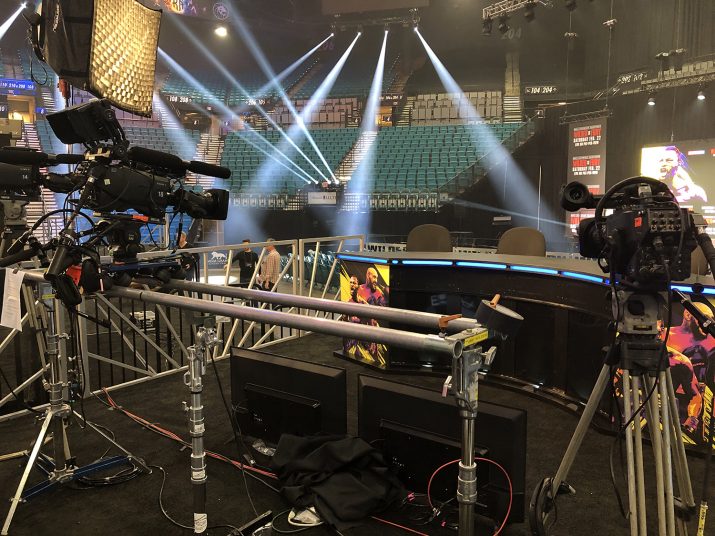 ESPN’s production at Wilder-Fury II features a JITAcam, an overhead mic array, a Flycam and much more

knockdown],” said Lynne West, senior operations producer, ESPN. “It’s totally home-grown, and we’ve been using it for a couple of fights. We’re continuing to develop it, and it’s still a work in progress, but we’re really excited to have it in the corners for this fight. It gives us a different angle shooting up at the fighters, and we are able to [capture] them coming down perfectly when they hit the mat.”

A 4DReplay system featuring 120 miniature cameras has also been installed above the ring, allowing ESPN to incorporate quick-turnaround dynamic, 360-degree replays into the broadcast.

“This the first time we’re using DigiBoom,” said Bloomstone. “We think that will provide [the production team] with a vantage point that they haven’t been able to offer previously: to really get in there and capture some good intimate shots in the ring.”

AVS is also handling the RF signal send/receive for the helicopter aerial shot, and NEP’s Fletcher Group has supplied ESPN with six robos inside the arena.

The broadcaster has also integrated AR virtual graphics on one of the jibs at its MGM Grand Casino set, as well as a slash camera for the fight to allow virtual player cards and other graphics to be seamlessly incorporated into the coverage.

“Over the years, we have endeavored to try new [production tools] on boxing, and we’ve always looked to push the envelope,” said West. “So this is a strong moment for us. A lot of the team here — both production and operations — has been involved with [ESPN] boxing for years and has seen many different variations of this boxing package, so we hope [an event] like this affords us the ability to continue to do more and push that envelope.”

Inside the Compound: NEP and PSSI help bring the fight to the masses

ESPN has rolled out NCP 10 (A and B), its regular mobile unit for Top Rank boxing shows, in the compound. NCP 10’s A unit is hosting the cameras, and its control room will be used for the PPV main event, as well as for a few fights earlier in the evening. The B unit plays home to all the studio programming throughout the week, as well as prefight (on ABC) and postfight (on ESPN2/FS1) studio shows on Saturday.

In addition, NEP ND7 will handle the undercard fights, which will be carried on ESPN/ESPNEWS and FS1, as well as in Spanish on ESPN3 and Fox Deportes 5-9 p.m. ET.

As a global PPV event, ESPN is relying primarily on a mix of C- and Ku-band satellite uplink, provided by PSSI/Strategic TV, to distribute the fight around the world. 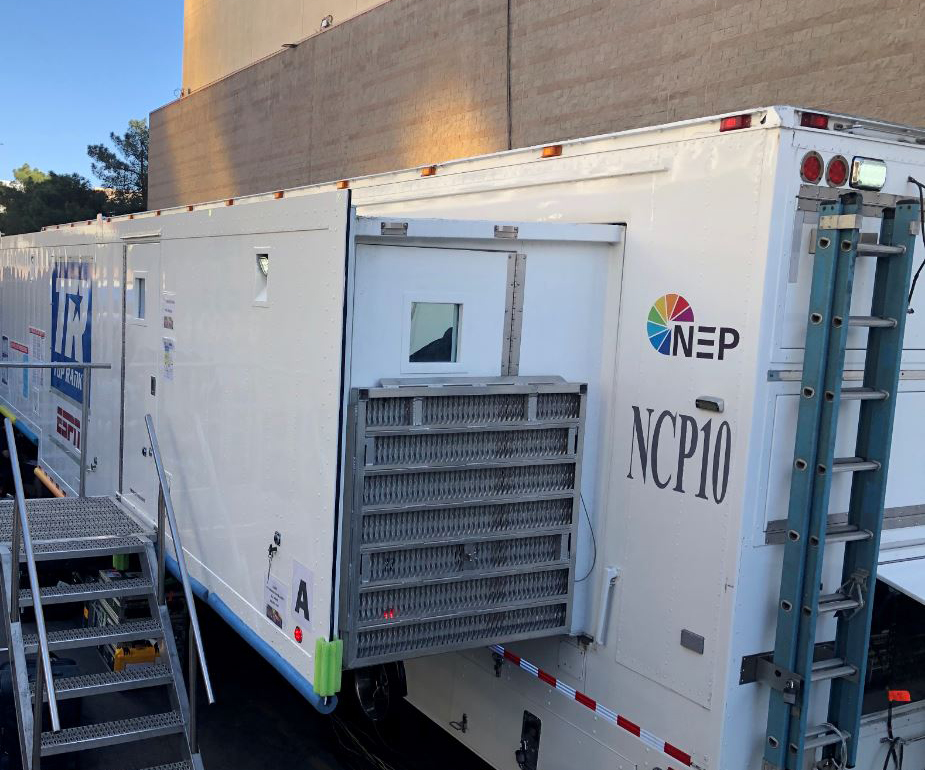 ESPN is using NEP’s NCP10 as its primary OB unit for Wilder-Fury II.

“This is a PPV, so, unlike a normal boxing event for ESPN, we will be basically be sending [the live feed] to the world directly from site,” said Rainey. “We do have a limited amount of fibre transmission with a couple of paths in and out, but the vast majority of transmission is being done on satellite. That’s a bit of a different situation for us, so we’re thankful to have [PSSI] on board to help manage the international distribution.”

Since inking a new deal with Top Rank in 2018 to produce 54 live events per year (18 cards on ESPN, 12 primetime events on ESPN+, and 24 international events on ESPN), ESPN ramped up the level of its boxing productions and hopes that Saturday’s high-profile PPV will spotlight these efforts in front of millions of viewers.

“Over the past year,” said Bloomstone, “ESPN has been putting a lot more effort and [resources] into boxing overall. So to be able to ramp up even further for an event like this is very exciting. There were certainly sleepless nights leading up to this for all of us, but we couldn’t be happier to finally be here and ready to go.”