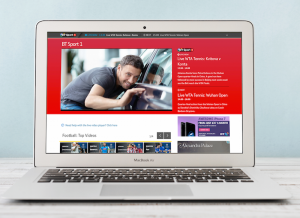 BT Sport has deployed Yospace’s innovative solution to monetise live channels across its online platforms. Launching ahead of the 2016 Premier League football season, the Yospace platform enables ad breaks in BT Sport’s live streams to be replaced when viewed online, in a way that is frame-accurate and seamless for the viewer. The result is a vast amount of new inventory being made available across the broadcaster’s impressive line-up of exclusively live sports coverage.

Possessing rights that include the Premier League, UEFA Champions League, UEFA Europa League and the Aviva Premiership, BT Sport has attracted millions of customers through its fan-friendly approach. In keeping with this approach, the replacement of ad breaks using Yospace’s solution ensures a true broadcast-quality viewing experience.

By managing each individual streaming session, Yospace allows replacement advertisements to be chosen based on their relevance to an individual viewer and, as a result, the viewer is more engaged and far more likely to watch through the ad break.    Advertisers benefit greatly from such a high level of audience penetration while the viewer enjoys the streaming of the events.

“BT Sport is a ground-breaking, vibrant service that brings the best quality sport to its customers across a wide number of platforms and devices,” said Tony Singh, business affairs and development director, BT. “Yospace  will be a strong partner as we look to open up advertising opportunities and maximise their potential while putting the needs of the viewer first.”

“BT is an exciting player in sports broadcasting in the UK and it is a pleasure to add them to our impressive list of broadcast customers,” said Tim Sewell, CEO of Yospace.  “The demands of such a wide range of live sports coverage on infrastructure are huge, and our platform has proved its robustness in such an environment.  BT’s selection of Yospace further demonstrates our position as the leader in multi-platform stream manipulation.”