Followers of France’s Ligue 1 are some of the first to experience EVS’s C-Cast technology, which Canal+ has tapped to power its innovative second-screen app for subscribers. 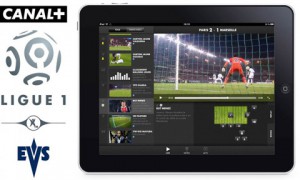 Canal Football App launched during the live broadcast of the first headline match of the season between Stade de Reims and Olympique de Marseille in August. It’s a complex beast — featuring stats, multicam video clips of highlights, and such bonus material as super-slo-mo replays — and thus required a few organisations to pull it together: Canal+ Sports conceptualised it with the help of the engineering department at Canal+, and the Netco Sports group looked after the design and the interface.

According to François-Charles Bideaux, director of sports production at Canal+, it was very important for the C-Cast operation to not disrupt the established broadcast workflow, and that largely seems to have been accomplished. “It was easy to set up because, in our truck, we are already using EVS XT2s,” he says. “We just had to add C-Cast and a clip producer, who is operating it.”

During the match, someone in the new role of clip producer creates clips and associated metadata using EVS’s content-production–management suite, IPDirector. Key action shots and their references are then automatically transferred to C-Cast’s central database, where they were available in multiple angles and in a proxy-file format. Graphics showing match statistics — created with Symah Vision technology — are also integrated into the database using the system’s API architecture. The content is then piped out to the app with an average two-minute delay.

“The most difficult part of the project we had to solve was the transmission,” says Bideaux. “Because there are very few fibre-ready stadiums in France, we undertook many tests to discover what was the best way to send the C-Cast data.”

The result is that the C-Cast material is transmitted back from the OB via satellite Internet, which is part of the reason for the fairly hefty latency. Hopefully, that will be reduced soon.

“We are hoping to change that next April,” comments Johann Schreurs, general manager, new media broadcast, at EVS. “So, if you have a one-minute clip, it can be available on the tablet within 20 seconds, as the beginning of the file has already been transmitted while the end of the file is still sitting on the server. Some users are using the app as an archive after the game to analyse it in depth, but others are wanting the pure second-screen experience. Two minutes is not yet a problem, but, equally, we want to get it down to 30 seconds or a minute, so that, as soon as they’ve watched the replay on their television, it’s available again if they so wish on their second screen.”

Featuring additional special content, the app is available on iOS for iPad users and, since the beginning of September, on Android for Samsung Galaxy tablets.

“Samsung themselves requested that we also launch a version for Galaxy tablets,” says Bideaux, highlighting the fact that the tablet manufacturers are competing to get sticky content like this on their machines. “From our monitoring, we are seeing that, on average, people spend 60 minutes per game in the app and, on average, they watch 15 video clips each. We showed those numbers to Apple, and they were astonished.”

And plenty more people are likely to be astonished as well. Canal+ plans to provide the Canal Football App during live coverage of all 76 headline matches per season for the next four seasons, which is a fairly major commitment.

It is also widening its reach. “At the beginning, we were thinking of only having the app on tablets, as we thought that the screen for mobiles was too small,” says Bideaux. “But our subscribers have requested massively for the app to be ported to mobile, and we launch that in a couple of weeks.”

Other forthcoming services include betting integration. Bideaux, however, finishes with a caution about rights: “In all this, you have a question of TV rights. For example, we’d like to let people watch the video the day after the match, but we can’t, as the online rights are sold somewhere else.

“Tablet screen size is potentially a problem, too,” he continues. “If you put the live action on the tablet, which is possible, and you sell the rights to a telecom company, then it will compete directly with the rights you have sold to the TV company. The high price that television is paying for TV rights can be undermined by this.”