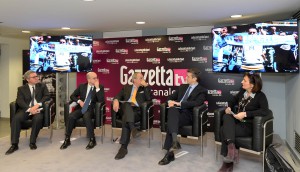 “We are located in Via Rizzoli 8 in Milan, within RCS, and basically we cover all football, some basketball, women’s volleyball, and more or less everything else that is followed by [our namesake] newspaper.” So says Marco Certaldi, who is technical manager of the newly-launched Gazzetta TV, which went live for the first time on 26 February 2015.

Certaldi continues: “The TV channel, therefore, is a transposition of the most famous Italian sports newspaper. For external filming we are using a couple of services and within the HQ we have two shooting studios: one is dedicated to sports news bulletins every hour (of which five are live) from 7am.

“The news feed contribution comes to us from Infront in whose headquarters, in via De Ruta, we have about a dozen dedicated post-production suites.

“In our headquarters there are five post-production suites and two graphics areas that produce all programmes, except promotions, along with channel graphics and more.

“Having started broadcasting on February 26 with League matches already underway, it was not possible to bet on the rights of the images so much has been done to achieve the most attractive infographics, with two suites working all day to prepare the necessary inserts.

“The sports news studio includes five remote cameras, specifically Panasonic 870s, all with HD; the video mixer is from Panasonic, too. All graphics are created with specialty sports ClassX modular solutions, including interaction with social media in terms of comments on the matches.

“The audio section is centred on a Yamaha mixer, while the infrastructural modular part, transcoding, distribution and more are achieved by Evertz Quartz as well as the matrix.”

“The sports news section was integrated by Professional Show, whilst the talk show area was achieved by Media Design. Both are well-known and acclaimed Italian systems integrators.

“The RVM section, both ingest and playout, is realised on a Softron Media system and a dedicated SUN by Digital Wide. The editing is on Final Cut 7, but for compatibility with Infront and to exchange projects directly on all stations Adobe Creative Cloud was also installed. Premiere will become operational as soon as possible because it handles the MXF workflow very well. Integration with After Effects, then, is very tight.

“All editing stations can access the SAN and also the RVM. We then have a MAM performing directly on the production SAN, and the journalists with their editorial systems may access the contributions in the archive quickly and effectively.

“They choose what to edit in low resolution, both the short and [long-form] clips, and then the editor reassembles online in high resolution.

“The sports news solution was developed by EBD (European Broadcast Development), as well as the playout, and both are highly customised to meet our needs.

“Most of the images in ingest derive from a shared network where you can also exchange finished stories. In addition, we have lots of great archival footage of still images and videos.

“The master control is used to receive live video feeds from satellite, from Infront, and over IP from other locations, via Solferino and Rome, by H24.

“Here the signals are routed to the studios and the playout that is carried on by Infront directly with EBD technology, connected to a MAM with an archive that is unique both for playout and production.

“The video is only in SDI, while the shared network used by editing is on IP. The MAM server is distributed between our HQ and Infront ones, so it is subservient to the playout of the news editor without incurring latency issues.

“From there the signal reaches Cologno at EI Towers, which carries it to Persidera for final broadcast. Here we arrive at ASI and the EPG is added and from there you get to the mux.”