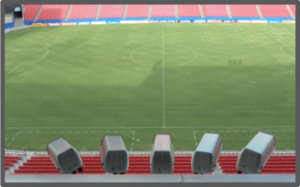 For more than 16 years, Match Analysis has provided cutting-edge video and statistical analysis tools to top football clubs, leagues, and media outlets worldwide. Match Analysis innovations and affordable solutions have transformed performance analysis within the sport, changing the way that how coaches, analysts and players use match video and statistical data to improve player and team performance.

K2-8K will become the latest addition to the company’s leading product suite and builds on the success of the K2 Panoramic Video system, one of the company’s most notable contributions to top tier performance analytics. Match Analysis’ K2 Panoramic Video Camera System introduced teams to a previously unobtainable corner to corner view showing every player throughout the entire match. This unique technology ensured every event including critical off the ball movements could be analysed, allowing teams to study and improve their performance in more meaningful ways.

“K2 Panoramic Video was the most successful product launch in Match Analysis’s history. It was originally developed to show all 22 players and off-the-ball movement, and deliver the ideal tactical view for coaches and analysts,” said Mark Brunkhart, president, Match Analysis. “Our clients have confirmed how dependent they have become on K2 Panoramic Video and prefer to work extensively with it rather than broadcast video. Their requirement for greater tactical use of panoramic video in their pre and post-match analysis has been a key driver in the development of K2-8K.”

With five cameras (two more than the previous system) and a combination of fixed-focus lenses calibrated for each individual stadium, K2-8K doubles the resolution of panoramic video to 7680 x 1536. The advent of the five-camera system provides superior coverage of the goal mouth and far side of the field. Lenses with greater magnification further augment video quality so that detail in even the furthest action from the cameras can be zoomed into and clearly defined.

Transferring larger video files produced by higher resolution is quick and efficient with K2-8K incorporating the latest compression technology. “Recording High Efficiency Video Coding (HEVC) video as well as the established H264 provides a significant improvement in video compression and supports resolutions including 8K ultra-high definition,” advised Alistair Brightman, Match Analysis’s director of product development. “K2-8K is also optimised for the high-frequency vibration encountered in stadiums due to crowd movement and camera positions exposed to the elements. Each camera is stabilized independently, before the different video streams are combined into a steady panoramic video.”

Many key events, off the ball incidents, tactical angles, overall team shape and the positioning of every player are often absent in broadcast or club’s own video recordings. As a result, K2 Panoramic Video has become the go to product, with the system installed at every Major League Soccer and Liga MX stadium since 2013.

Referee organizations, league officials and disciplinary committees also recognize the power of K2 Panoramic Video and have incorporated the technology into their review process for assessing referee performance and evaluating controversial events.

Match Analysis Panoramic Video not only delivers the ideal full pitch tactical view; within Mambo Studio it also provides clients with access to: pan and zoom functionality to focus the cameras on who and what they view; dynamic visualizations drawn within the video itself; accurate non-intrusive tracking (X,Y) data of all players and officials; advanced fitness reports for every player including opposition; and interactive touch panel engagement

“With K2-8K the improved quality and functionality enhances how the system can be used for performance analysis, while also opening the door for its use in many other applications,” said Stephen Hamilton, Director of Marketing and Business Development at Match Analysis. “K2-8K has been designed so clients with the current stadium K2 Panoramic Videos System have an affordable option to upgrade to the new system, allowing them to capitalize on their initial investment. The K2-8K is just an amazing piece of technology and a great step up for those clubs looking for the best of the best.”