The host broadcast coverage of the UEFA Champions League final on 23 August will be as resplendent as ever, complete with 4K HDR pictures and Dolby surround sound and match action captured by a drone and super high-speed, Polecam and in-goal cameras, among other things.

To provide an atmosphere in the empty stadium, augmented crowd audio will be added to the output too, as has been the case with the big domestic leagues around Europe, and an aerial camera system will deliver dynamic shots from behind and above the players.

But for UEFA, and its production supplier for the Champions League finals tournament Mediapro, the priority for 2020 is undoubtedly safety: the safety of the crew, technicians and everyone involved in the game; but also safety in terms of the broadcast output.

The priority during a global pandemic is not to be taking risks with anyone’s health, or with the match coverage, as Francisco de la Fuente, the general manager of the Mediapro Group’s Portuguese operation Medialuso explained to SVG Europe ahead of the final.

“The most important thing for UEFA is to have good coverage of all the matches with similarly high quality in both the 4K HDR and HD SDR feeds plus the virtual crowd audio,” he says. “We want good coverage and good security and safety [from COVID-19] with no problems. Keeping everyone – and the match coverage – safe is mandatory.”

The final was originally slated to be played in Istanbul at the Atatürk Olympic Stadium but, because of coronavirus, the Champions League finals tournament – consisting of the quarter-finals, semi-finals and final – is being played as straight knock out matches, in neutral venues in Portugal, between 12 and 23 August. All the matches are being played behind closed doors.

Several factors drove UEFA to decide to bring the 2019-20 competition to its conclusion in a single city and in neutral venues including “the need to choose countries with a positive evolution in their epidemiological situation”.

It also took into account the support from the relevant football association and local authorities, stadium infrastructure and the association’s operational expertise.

The final matches of 2020, therefore, are being split between Estádio do Sport Lisboa e Benfica, the home of Benfica and more commonly known as the Stadium of Light, where the final will be played, and Sporting Lisbon’s Estádio José Alvalade.

To ensure safety, the stadiums are divided into four zones. Zone One: pitch and benches, Zone Two: pitch surroundings, Zone Three: tribunes and stadium interior and Zone Four: stadium exterior. No more than 120 people are allowed at a time in Zone One, and no more than 100 people (including the teams) can enter Zone Two.

Whilst UEFA has acted as host broadcaster before at the Champions League final, usually the local rights holder in the city that the game is being played is tasked with that responsibility. This year, production has come in-house with UEFA taking control of host broadcast operations and the Mediapro Group producing the world feed of all the matches on its behalf.

For the quarter-finals and semi-finals, the broadcast format options for rights holders are HD (1080i 50) or UHD, both with standard dynamic range. Also, 25 cameras are being used for coverage of the quarter-finals while the semi-finals are benefitting from 28, with the addition of two Polecam Pico systems and a drone.

For the final, things go up another notch. The broadcast formats will be simultaneously synchronised and timed UHD with high dynamic range (HDR) and HD (1080i 50) feeds with both produced from a single production set-up.

The camera count will go up for the final too; 31 will be used with two additional high-speed cameras and a tactical high camera positioned behind one of the goal being added to a set up that already includes the aerial camera system and a drone plus four super-slo-mo and other hi-motion cameras, two in-goal cameras, the two Polecam cameras, and all the standard camera positions around the pitch and stadium. 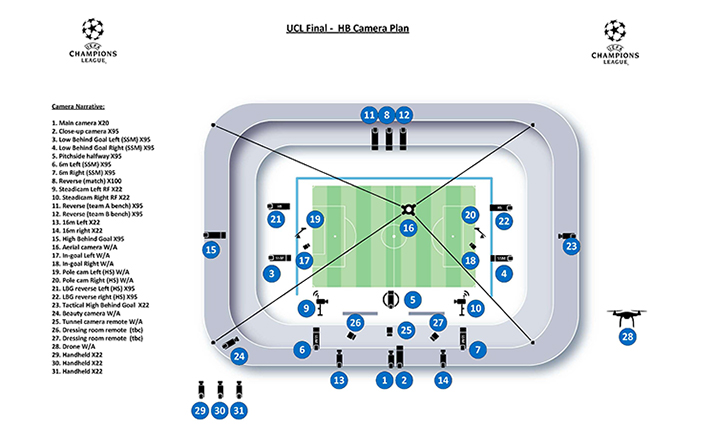 Sony cameras with Canon lenses are being used for the main coverage. Pictures are being switched using Grass Valley Kahuna vision mixers and replays are being done using the EVS XT-Via. Additional EVS systems will be added for the final.

Although the number of people allowed inside the ground is limited due to the health and safety protocol, rights holders have been given the opportunity to enhance their unilateral coverage.

They cannot bring their trucks into the compound but 303 TV and radio commentary position desks are available across the final tournament, along with 60 pitch presentation and tribune presentation positions, 31 flash interview positions and 44 unilateral camera positions behind the goal.

Mediapro is providing OB trucks for the unilateral output.

“In these finals, the broadcasters don’t have the opportunity to put facilities in the stadium,” says de la Fuente. “All the rights holders use the UEFA facilities for unilateral. This includes the option to book a package camera for unilateral use.”

For the audio, a full 5.1+2 Dolby E production is available, consisting of a 5.1 channel programme and a two-channel secondary audio programme. A Dolby E multichannel audio mix will be required for distribution and transmission for all the feeds.

To compensate for the lack of supporters in the ground, all the matches, including the final, will have enhanced crowd audio available on both the HD and UHD world feeds, supplied by Sky Deutschland.

“We have a special van for mixing the enhanced audio,” says de la Fuente. 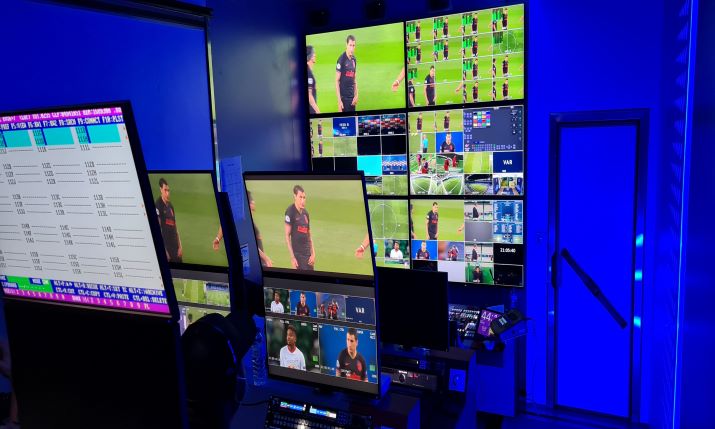 Inside the OB, ready for the UEFA Champions League Final!

Approximately 214 Mediapro crew and production staff are involved in the finals tournament, deployed as two different teams across the two grounds in Lisbon. This ensures that if one team gets ill, the other team will not be affected. The only crossover is for the virtual fan audio and for the HDR work, which is being shared across the two venues in order to ensure picture consistency.

Between 15 and 20 members of the crew are on standby in case a positive COVID test prevents anyone from working.

All of the Mediapro team working in zone 1, and in direct proximity to the teams and officials will have been tested for COVID-19, with the rest of the crew working under strict social distancing regulations, operating between perspex screens in the trucks and wearing masks and other face protection.

“To comply with UEFA’s COVID-19 rules we have to activate media accreditation every day too,” says de la Fuente. “Two hours before the start of each working day, we have to communicate who is working, what they are doing and at what time. They have to complete a COVID-19 form. This gives UEFA complete visibility over the number of people on site and where people go and helps to ensure everyone stays safe.”

As was the case in 2019, the highly experienced Juan Figueroa will direct the final.

For de la Fuente, COVID-19 is the only big problem his team faces this year.

“It is a very important production and a very important event, of course. The most complicated thing is to maintain the health and safety rules, and the people’s mentality, to ensure that we don’t have a problem and avoid any risks.”

He jokes that, if anything, it is easier in some ways to provide the host coverage this year, especially in and around the TV compound.

“Without the broadcasters here, there is a lot less stress! There’s no ‘can we have this, can we have that?’ It is totally different. Everything is under control. It is nearly all Mediapro people,” he adds.