Inclusion and innovation top the agenda at DACH 2022 Summit 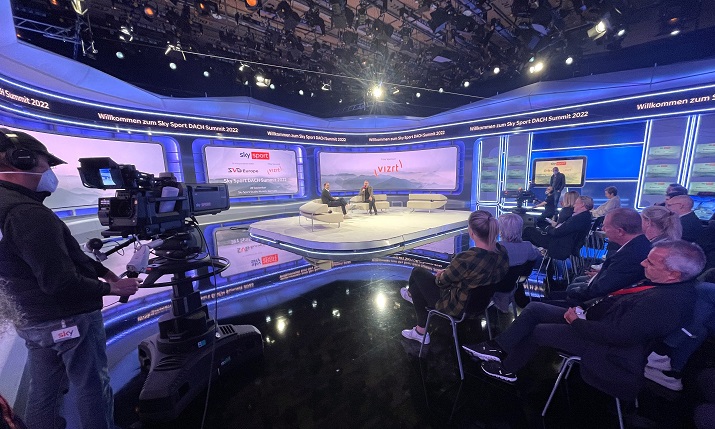 Inclusion, innovation and engagement were the standout themes of the Sky Sport and SVG Europe DACH Summit in Germany on Wednesday.

The annual day of panels, presentations and networking took place in front of a packed audience in Studio A of Sky Sport’s Munich facility.

The broadcasting and production community from Germany, Austria and Switzerland gathered during the Vizrt-sponsored day to discuss recent projects including the 2022 European Championships as well as upcoming events such as Qatar 2022 and next year’s Special Olympics, while also considering the latest developments in technology and workflows.

“We’ve based our production plans on what broadcasters want and what they tell us most, is that they want to see as much to do with fans interacting with each other as possible.”

It began with a look back at the European Championships which took place at the Olympic Park in Munich and around the city in August. EMG took on the role of host broadcaster for the 11-day multisport event, working directly with the local organising committee (LOC) to provide production facilities in support of the LOC’s host broadcast plans, which included more than 400 hours of live production captured from 12 competition venues.

In conversation with Reitano, EMG German chief executive Rene Steinbusch said preparation for the games began one year ahead of the event.

One of the key technical features introduced for the Championships highlighted by Steinbusch was the use of EMG’s diPloy IP flypack system, which was housed in two shipping containers at the IBC and used instead of traditional OB trucks for coverage of all events taking place at the Olympic Park.

“IP was definitely the best solution – it was breath-taking; we were able to network everything,” said Steinbusch.

Read more Live from Munich 2022: Inside the European Championships with EMG

Steinbusch also spoke of the challenges of recruiting and training staff. “We’re looking for a solution, just like everyone else,” he said. “We can train people on the job, and we also send people abroad to other countries in the EMG group to gather experience. When the Queen died, for example, we sent some of our crews to the UK; it is all about gathering experience.”

Steinbusch agreed with Reitano’s suggestion that a good work/life balance is important when it comes recruiting new staff.

“This isn’t just a German topic, it is Europe-wide,” he said. “Companies with unattractive work hours are most affected and work/life balance is at the moment most important factor. We need new concepts, not short term solutions. We have to work together to make the industry more attractive.”

The subject of recruiting and inspiring the next generation was also discussed during the second panel. Sky head of project management sports and former Bayern Munich midfielder Stefanie Mirlach along with pundit and former pro footballer Julia Simic joined Reitano for a debate on women’s sport at Sky Deutschland, with Mirlach providing insight into the broadcaster’s strategy for covering women’s sports.

She explained that Sky’s approach includes more on-air time for women’s sports, with Sky Deutschland building a broad portfolio of rights, including golf, tennis and football.

“What is important for women’s sport is to get the audience to watch our live content, which links to the second part of our strategy, which is news items. We integrate stories about women’s sport into our news and try to lead people to the live events.

“The end target is that women’s sport becomes normal and that we no longer have to distinguish between men’s and women’s sports anymore. We want to eliminate any negative connotations around women’s sport.” 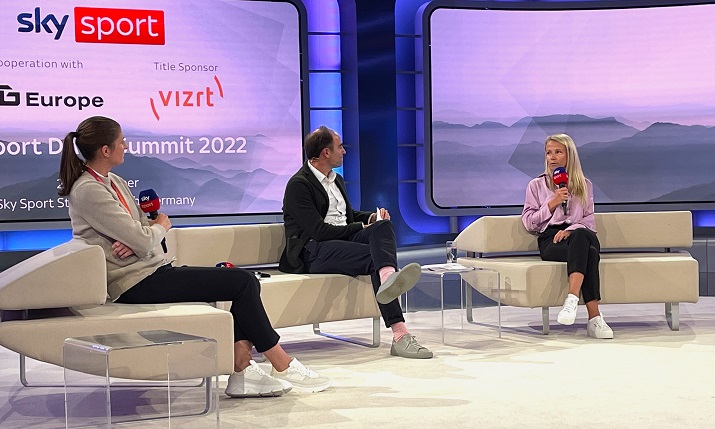 She said: “We have to provide more role models and women in sport to provide inspiration, and not just female presenters. Women need to be represented in every area. We have to take it seriously; girls need to be treated the same as boys at every level.”

Next on the agenda was a discussion with the head of the Virtual Bundesliga (VBL), Jörg Höflich.

Founded in 2012 by the DFL and EA Sports, some 26 teams take part in the competition which Höflich said provides an opportunity for those who may not be able to play physical sports for fulfil their dreams in online arenas.

“Maybe because of injuries or for other reasons some might not have been able to play for their clubs on a pitch, but they are able to do it virtually,” he said.

The ultimate aim for the VBL, Höflich added, is to have all 36 teams from the top two tiers of German football represented.

“That is what the fans want,” he said. “We have to look at the reasons why some are not involved – maybe it’s down to capacity.”

Höflich also heralded VBL’s fan engagement, which he attributed in part to esport’s organic growth with players emerging from their communities.

Next year, Berlin will be the venue for the 2023 Special Olympics, hosting 7,000 athletes with intellectual disabilities who will take part in a range of events.

Sky Deutschland is a partner of the event, while NEP is technical partner. Roman Steuer of the LOC was joined on stage at the DACH Summit by Sky’s Louisa von Lenthe and NEP’s Christer Palson.

Steuer said the 2023 event would be the biggest event in Germany since the 1972 Munich Olympics, and that it is important that coverage is not just about performance, competition and winners.

“It’s the taking part, they joy and the inclusion. It’s about overcoming the challenges of taking part, and of being seen. This is what we are working on with our partners.” 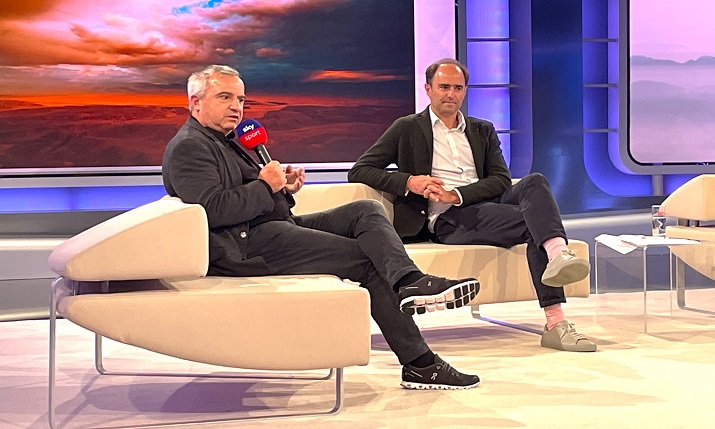 Von Lenthe said Sky had been working with the LOC for the past year on the many of the technical aspects of its coverage of the event in order to reach as many viewers as possible.

“It’s similar to our approach to women’s sport,” she said. “We want to use our power as a sport media company and not just present a one-off competition, but instead provide broader support through clips, trailers, social media platforms and more to help make it as well known as possible.”

A thought leadership panel on the subject of ‘Creative content strategies to engage fans’ then moved the debate on to the subject of how to ensure viewers are engagement.

Samuel Westberg of La Source, Mike Ward of Singular, Mehdi Megdiche of Sky Switzerland and Alexander Mölders of Sky Deutschland discussed the topic, with Westberg stating that participation is key, and the harvesting of data the “gold mine”.

Innovations at the Deutsche Fußball Liga (DFL) – especially those focused on helping fans feel closer to the action – were then discussed by Marcus Beisiegel of the DFL and Stefan Kramper of Dolby, who ran through some of the recently introduced advances in coverage of the league, which Reitano described as one of the most innovative in the world.

“We are getting quicker at development, because that speed is necessary,” said Beisiegel. “Our cycles are normally seven years, so if we start with something in 2022, then typically we are looking at 2029 as the end goal. We are unique in that we are always looking to integrate innovation into our core product. That is the challenge but also what we enjoy.”

Sky Deutschland created the first remote production of Dolby Atmos for a top-flight sport’s live major host feed in German for the Deutsche Fußball Liga (DFL) Supercup on 30 July, where RB Leipzig faced off against Bayern.

Read more Best seat in the house: Innovation scores at the DFL Supercup 2022

“We had fantastic feedback for that,” said Kramper. “It took seven years, but sometimes things take that long. When you are building such a system, all the components and the distribution platform can take that long. But it’s not just football – [Atmos] is relevant for all different types of sport for viewers to actually feel that they are present.”

Getting viewers closer to the action was also covered during the panel ‘Inside the action-packed Deutsche Tourenwagen Masters (DTM)’, with Oliver Simon of DTM and Wolfgang Reeh of TV Skyline.

The DTM motor racing series, which is in its 36th season, is aired live in 70 countries around the world. As well as a desire to add more in-car cameras, Simon also spoke of the shift to remote production.

He said: “It’s very difficult to create a full, live production remotely but we do have some elements such as news edits – none of that is produced on site anymore.”

Reeh added: “During the pandemic, when English commentators couldn’t travel, we came up with solutions so they didn’t have to be on the spot. But it’s difficult to create the whole event as a remote production. But when it comes to cameras, GFX – we’re not there yet.”

With the 2022 World Cup set to kick off in Qatar, FIFA’s Florin Mitu provided an update on the host broadcaster’s production plans. Planning began immediately after Russia 2018, Mitu said, with a sounding out of all of the rights holders to establish what they want from coverage of the tournament.

“We’ve based our production plans on what broadcasters want, and what they tell us most, is that they want to see as much to do with fans interacting with each other as possible.”

The conversation then shifted to a different type of football, with a discussion about the NFL. Alexander Rösner from ProSieben joined Reitano on stage to speak about the success of the broadcaster’s coverage of the NFL and how they have built awareness of the sport. The NFL estimates there are 19m NFL fans in Germany, and Rösner said the audience had embraced the sport and shown its support for their coverage via social media.

Rösner also spoke about the broadcasters plans for the the first-ever regular-season game in Germany, between the Seattle Seahawks and the Tampa Bay Buccaneers at the Allianz Arena in November. 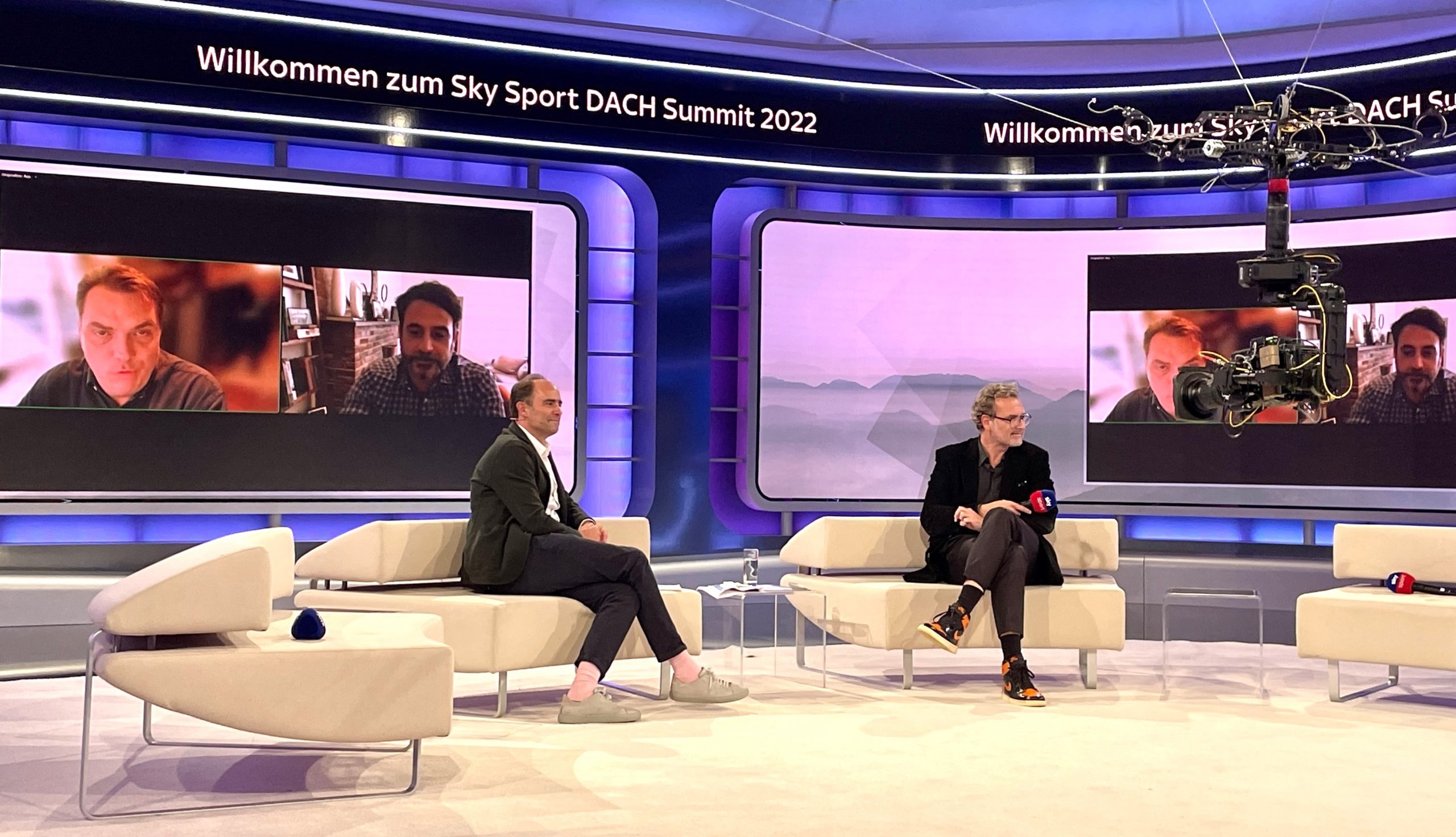 Craig Bernstein of NBC and Michael Davis of Fox then joined via video link from the US to speak about their coverage of the sport.

They were asked to give examples of how they think coverage could be advanced,  with the duo citing cinematic treatment and improvements in RF acquisition tools.

Davis said: “Shallow depth of field took everyone by storm a couple of years ago and that’s now settling into place. But there are two guiding principles to modern storytelling, especially for football: the more you can make a live broadcast like a video game, the better. And, the more you can make it look like a movie, the better as well. There is a saying: ‘the best live shows appear post produced’”.

For Bernstein, advances in RF would also be welcome. “We have come so far with RF cameras, but as we move to 1080p HDR and towards 4K, we need to push vendors to deliver better signals from smaller POV cameras.”

Amid a lively discussion that highlighted the flexibility and agility of cloud-based solutions and the merits of hybrid workflows, Osthaus sounded a note of caution.

He said: “For service providers like us, we have to choose the most relevant technique or process; I have to have control from signal production to the end of the process.

“Cloud can be very expensive. If, as a service provider, I am in the middle of the process I have to consider cost and what is best for me to recommend to my customers. We also have the question of employees, some of whom are old-school and have enough trouble integrating the internet into workflows. We have to take our employees with us, so it’s important we find a sensible solution.

“As service provider, I don’t think it matters whether I produce at a venue or remotely. What matters is the quality of the production. One size fits all doesn’t work with cloud and the challenge is to establish what does and what doesn’t work.”